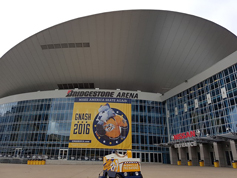 Hockey superstar P.K. Subban is hoping to bring a Stanley Cup to the Bridgestone Arena, home of the Nashville Predators.

Back for the First Time

P.K. Subban might be new to hockey novices but he is well known amongst fans of the ice.

Despite his past stardom, the 2017 Stanley Cup Playoffs have belonged to the Nashville Predators star and he is definitely enjoying his moment in the international spotlight.

According to NHL.com, Subban entered the NHL in 2007 as a second round draft pick of the Montreal Canadiens and immediately became one of the league’s best defensivemen.

On March 20, 2011, Subban recorded a hat trick against the Minnesota Wild, becoming the first Canadiens rookie ever to do so.

Subban won the Norris Trophy for the 2012-13 season, given to the NHL’s best defensive player.

And although P.K. Subban is still a Canadien at heart, his first year with the Predators might end with a Stanley Cup title and a bigger level of superstardom.

According to SportsBlog.com, Subban has two goals and eight assists this postseason.

In a game of stoic players, Subban has become a fan favorite because of his exuberant and positive personality, along with his swagger on the ice.

Predator fans refer to Nashville as “Smashville” and Subban has been a smash hit ever since arriving in the city famous for the “Grand Ole Opry.”

On the biggest stage in hockey, the Stanley Cup Finals, he will become a smash success even to casual fans of the sport.

The Predators will face the Pittsburgh Penguins in the Stanley Cup Finals, which begins May 29.