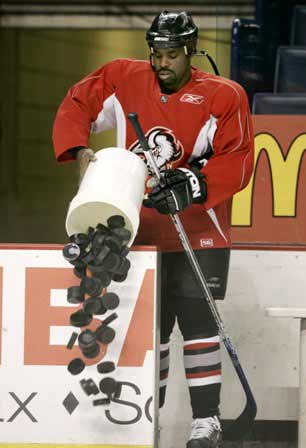 It is well known that Willie O’Ree of the 1958 Boston Bruins was the first National Hockey League player of African descent. But, except for seven games that Val James played for Buffalo in 1981, it wasn’t until Mike Grier played for Edmonton, Washington and San Jose from 1996 through today that an African American player was able to have a meaningful career in the NHL.

Grier came from a football family. His father, Bobby Grier is a former NFL running back coach and current Associate Director of Pro Scouting for the Houston Texans. His brother Chris scouts for the Miami Dolphins and his uncle is Rosie Grier, a star defensive tackle for the New York Giants and Los Angeles Rams in the 1950s and 1960s.

Mike Grier was born in Detroit, but it was a move to Boston at age three that he told Puck Prospectus set his hockey career in motion.

“My family was right in the inner city there (Detroit), so I don’t know if I would have been playing hockey. I might have been playing basketball or football, or trying to do something like that,” Mike Grier said. “I don’t know if I ever would have gotten into hockey. Hockey was something when we moved into Boston – my older brother, Chris, and his friends started playing, so I kind of tagged along to the rink. And when we visited my cousins in Detroit, none of them played hockey, or had any interest in it at all, so I would probably be doing something else for a living. I’m glad that isn’t the case.”

Mike Grier is a third-line forward for the San Jose Sharks, the team with the best regular season record in the NHL this year. On a team with Joe Thornton and Patrick Marleau, Grier isn’t expected to score (he had just 10 goals and 13 assists last season), but he is an important cog in the Sharks’ penalty kill.

“On the ice, I’m more of a defensive player, a third line guy who plays physical,” he said. “I’m responsible defensively and provide some leadership for the team. Maybe I’ll chip in some goals every now and then.”

“There’s charisma in Mike Grier’s character,” former Sharks defenseman Kyle McLaren told the San Francisco Chronicle. “Guys feed off of the intensity he brings.” The charisma, leadership and intensity that Grier brings to the Sharks are reflected in the “A” he wears on his jersey as one of San Jose’s alternate captains.

Grier has had one well publicized race-related incident in his hockey career. While skating for the Oilers against the Washington Capitols in 1997, Grier allegedly made derogatory comments about Native American Chris Simon’s Ojibwa heritage, and Simon allegedly responded with a racial slur directed at Grier. Although the spoken words were never confirmed, Simon was suspended three games as a result of the incident.

Despite that incident, Mike Grier sees a brightening future for African Americans interested in pursuing hockey careers. “The game has changed a lot since I started. There are more African American kids, and more minorities, playing hockey at all levels now than there were before. I don’t know if it is just the evolution of the culture in general, but it’s nice to see,” he told Puck Prospectus. “It’s helped that we’ve had guys like Jerome Iginla (a Canadian of African descent) who has been the captain of Team Canada and had a lot of success, winning scoring titles and things like that.

“So, the more success that we have as a group, it just helps spread the word that if you’re a young African American kid and you want to play hockey, you can play. I guess it’s all just part of the way life is going.”

Besides the Oilers and the Sharks, Mike Grier has spent time with the Washington Capitals and Buffalo Sabres. He just finished his third season in San Jose.