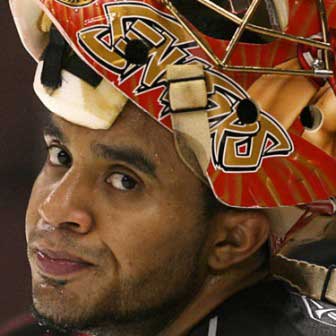 Last season the Chicago Blackhawks were defending Stanley Cup Champions in name only. The hard salary cap in the NHL forced the team to dispose of many of the players responsible for the championship, including goaltender Anti Niemi. The Hawks sank to eighth in the Western Conference last spring and were eliminated in the first round of the playoffs by the Vancouver Canucks.

This season has been a different story for the surging Hawks. With about one-third of the season passed, Chicago is second in the West behind the surprising Minnesota Wild. And one of the main reasons for the team’s success is goaltender Ray Emery.

Ray Emery, 29, joined the Blackhawks during training camp with no guarantees about making the team. In 2010 he was struck with avascular necrosis, the same hip condition that ended Bo Jackson’s football career and severely hampered him in baseball.  Doctors were able to stop the spread of the condition and after a stint in the minors returned in March 2011 with the Anaheim Ducks, where he had a 7-2 record, 2.28 goals against average and a .926 save percentage.

The Blackhawks kept Emery, originally as a backup to Corey Crawford. Crawford came up through the Chicago system and had a good year in 2010-11 in his first shot as the Hawks’ regular netminder. Unfortunately for Crawford, he had trouble stopping pucks and after 23 games he had a goals-against-average of greater than three and had stopped fewer than 90 percent of shots that had come his way. This provided Emery with the opening he needed, and he didn’t let Chicago down.

Blackhawks coach Joel Quenneville noted that, “every game Emery has started for us he has earned points, except for the one game which was our toughest as a team the whole year [a 9-2 loss in Edmonton].” Crawford, meanwhile, is taking a break from games and working with Chicago goaltending coach Stephane Waite.

Ray Emery remains humble despite the recent turn of events. After stopping 35 of 37 shots in a 3-2 overtime victory over the San Jose Sharks, Emery demurred when asked about his claim to the starting position. “I think it might be an opportunity to give [Crawford] a bit of a rest,” he said. “Maybe that’s what my contribution can be to a successful playoff team — is having a fresh goalie.”

Besides a fresh goalie, Emery is also a seasoned goalie at the NHL level. In 2007 he was the starting goaltender for the Ottawa Senators club that went to the Stanley Cup finals before losing to Anaheim in five games. He has also logged NHL time with the Philadelphia Flyers, where he tied Hall of Famer Bernie Parent’s team record with 12 wins in a month in March of 2006.

Ray Emery spent the 2008-09 season with Atlant Moscow in the Russian Kontinental League when he received a $2 million contract. He returned to the Flyers after one season when the devaluation of the ruble led to an unexpected cut in his salary.

As the NHL season moves on it will be interesting to see how the Crawford-Emery situation plays out in Chicago. It’s the home-bred goalie versus the well-traveled veteran. Normally in that situation the home grown player has the advantage, but Ray Emery is putting up impressive numbers and generating wins for the Blackhawks. In professional sports we have reached the point where winning trumps all. Regal is excited about Ray Emery’s prospects in the windy city.