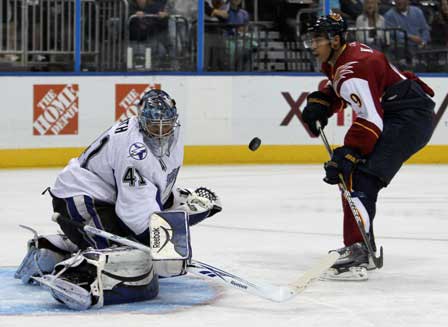 Thrashers center Evander Kane (9) is one of several Blacks starring for the team in 2010-11 (David Goldman/AP Photo).

The Atlanta metropolitan area sports a population that is more than 50 percent Black, and its hockey franchise has only led the National Hockey League (NHL) in empty seats since its inception in 1999.

This year they are trying something new in the predominately White NHL, a roster that at times this season has sported five Black NHL players. The Thrashers have used that fact and those players’ likenesses in ad campaigns designed to sell tickets.

The Thrashers, of course, deny that considerations other than hockey talent impacted the makeup of their roster. “It all just kind of happened,” Thrashers President Don Waddell told the New York Times. “It wasn’t like we went out and tried to pick up Black players.”

Black NHL players currently with Atlanta include Johnny Oduya, Dustin Byfuglien, Evander Kane and Anthony Stewart. Nigel Dawes opened the season with the Thrashers but was shipped to the Chicago Wolves of the American Hockey Association (AHA) after five games.

NHL.com reports that Atlanta also has Akim Aliu playing in Chicago and this summer drafted Sebastian Owuya, a Swedish defenseman like Oduya who is playing for the Medicine Hat Tigers in the Western Hockey League as well as Yasin Cisse, a Boston University freshman from Quebec. Rounding out the Thrashers’ group of Black prospects is Jordan Samuels-Thomas, a budding power forward from Hartford, Conn. who led Bowling Green State University’s team in scoring as a freshman last season.

But what do people think about the Thrashers using their Black roster and pipeline as a tool to sell tickets? “It would be silly not to try to promote it and market it,” Kane said. “The Thrashers are probably going to try to do that and I’m more than willing to be a part of that and be one of the focal points of that campaign.” Kane was the fourth player selected in the 2009 NHL entry draft, the highest selection ever amongst Black players. “Hopefully someday somebody can beat me,” he told NHL.com.

Byfuglien is also a top-tier NHL player. He was a finalist for the Conn Smythe Award last season as MVP of the playoffs when his Chicago Blackhawks won the Stanley Cup. He is unique in that he is an NHL-caliber player as a forward and a defenseman. Oduya is a solid, stay-at-home defenseman while Stewart is still trying to establish himself in the NHL.

The Thrashers are the first U.S. team to employ five Black NHL players. The only team to do so prior was the 2000-2001 Edmonton Oilers. Black players used to be a novelty in the NHL, but now are becoming more common. “It’s starting to get normal,” Oduya told NHL.com. “I like that.”

Through the end of October, the Thrashers were 4-4-2, including wins over the Washington Capitols, the favorite to represent the Eastern Conference in the Stanley Cup Finals, and Western Conference powerhouse San Jose Sharks. They also beat the Rangers when they took their show to the “Big Apple.”

They also could be inspiring. Regal hopes that somewhere in the southeast there is a young Black hockey player working hard to become a Black NHL player because of the example set by Kane, Byfuglien and the other Black Thrashers. “If you can inspire somebody to push that extra mile and see maybe that it’s possible for them to do it, that would be a good thing,” Oduya said to NHL.com. “It’s good to see that it’s something that is not a weird thing anymore.”