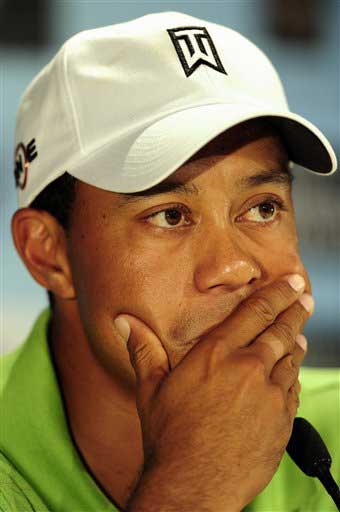 Latest on Tiger Woods from the golf courses of America leaves much to be desired.

Has Tiger Woods Lost His Bite?

The latest on Tiger Woods is not encouraging for fans of the erstwhile king of the PGA Men’s Golf Tour.

So what happened? How hath the mighty fallen?

“The best evidence we have ever seen that golf is a game played with the mind was provided by Tiger,” former touring pro and current Golf Channel analyst Brandel Chamblee said to USA Today. “Golf is basically a chess game with an athletic move. There is no other sport where there is so much down time between one shot and the next — and during that time you are fighting an asteroid storm of thoughts. For Tiger, in that five, 10 minutes between shots, he is thinking about his divorce, what TMZ was going to do, and every little thing you can think of.”

So perhaps it is a temporary slump and the Nicklaus record is still in play. What is the latest on Tiger Woods? Can he recover? Many think he can, and that he has too much talent for it to lie dormant forever.

Woods’ very first coach was Rudy Duran, who began tutoring young Eldrick at age 4. “He hasn’t forgotten how to play. And once he gets a swing he’s comfortable with,” Duran said to the Associated Press after Woods missed the cut last week, “who knows what he’s still capable of?”

“If he works at it, he’ll get his game back. He’ll either figure out how to put it together or go in a different direction,” said Hank Haney, who coached Woods the half-dozen years between Butch Harmon, his first pro coach, and current swing coach Sean Foley.

“Criticizing the method any of us used, frankly, is irrelevant. This guy has so much talent; he can learn to make almost any swing work. And if it doesn’t work, well, that’s just temporary. Like I said, he’s not afraid to go in a different direction. …

“In my mind, what happened this weekend raises two questions: Will his body hold up so he can practice enough to make this swing work? And if his body can take the work, does he still have the passion to plow in all the practice it will take to make it work?”

After missing the cut last weekend and failing to qualify for the PGA Playoffs, Woods himself sees an upside. “Now, I have nothing to do but work on my game,” he said.

If history is a guide, many players on the PGA tour, along with Nicklaus, have reason to be nervous about Woods in 2012 and beyond.