Future of Tiger Woods in Doubt 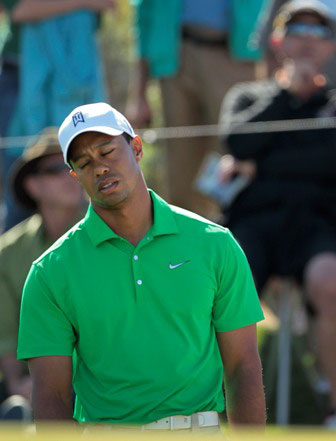 Has Tiger Lost His Bite?

Tiger Woods woke up on the Monterrey, Calif. peninsula on Sunday, Feb. 12 knowing he was paired with rival Phil Mickelson in the penultimate group of the AT&T ProAm, four strokes off the lead behind a pair of relatively unheralded and inexperienced players. Throughout the latter half of the 1990s and most of the first decade of the 2000s, this was a set stage for a patented charge and a likely tournament win.

This time, though, Tiger shot a 75 as his putter abandoned him while his nemesis Mickelson was 11 strokes better and took home the tournament trophy. Woods has not won a PGA title since 2009, and is zero for majors since 2008. Is this a trend, a permanent state of affairs, or a blip on the screen towards greater success?

So what is the future of Tiger Woods? Has the tour passed him by? Have his famous leg injuries robbed him of that little edge that often separates victory from defeat? Will he be forever stuck on 14 majors? Is the Jack Nicklaus record of 18 major tournament victories now out of reach? At 36, has he passed his athletic prime and are his days of regular appearances on the Sunday leader board a thing of the past?

Nicklaus himself says Woods can match and surpass his feat and return to championship form “if he gets the five inches between his ears squared out.”

“I mean Tiger has a great work ethic, he’s a great competitor, the most talented kid on the planet right now,” Nicklaus told The Associated Press. “He’s not going to go away.

“How could you not pick him,” Nicklaus continued. “I mean, he’s Tiger Woods, he’s the best player in the game. He may not be playing his best today, but he’s still Tiger Woods.”

Hank Haney, one of Woods’s former swing coaches agrees with Nicklaus, if Woods can sufficiently ignore the persistent pain in his legs to practice regularly. “Given the opportunity to practice and play, if he still has the desire and the passion, and he has the body that will allow him to do it, then there’s no reason to think that he couldn’t still break Nicklaus’ record.”

Haney told USA Today that there are two ways to look at it because Nicklaus was 46 when he won his last major at the Masters in 1986. Woods is 36. “Tiger has 40 more majors to play in. But these majors are slipping by,” Haney said. “And then you look and you say he just needs to win five more. But the fourth and fifth one will be the really difficult ones. But you can say he’s got plenty of time, he could do it.”

There is at least one prominent naysayer when it comes to the future of Tiger Woods. Greg Norman, the Australian golfer who was ranked number one in the world for 331 weeks in the 1980s and 1990s and owns two major championships, doesn’t believe Woods will add to his total of 14.

Norman’s credibility is particularly high in this area, because no golfer knows more about missing out on major championship opportunities during the prime of his career than the big blond Aussie. First amongst his calamities in major tournaments was the six stroke final-round lead he blew in the 1996 Masters. He also botched late leads at the 1986 Masters, the 1986 PGA, the 1987 Masters, the 1989 Masters, the 1989 British Open, and the 1995 U.S. Open.

Still, Norman was comfortable sounding off about Woods.

“Tiger, when he dominated, had a single-shot approach,” Norman said in Golf Magazine. “It was only about the golf. That’s just not the case anymore.

“Now there are so many distractions, and people are looking for things that are wrong with Tiger now, so he’s got to deal with that on a day-to-day basis, like every other mortal has to do, right?” Norman continued. “In our lives, in our business, we all have to be responsible for our actions. It’s very hard for him to have that focus. And the more he shuts people off, the worse it gets.”

Nicklaus and Haney hold what seems to be the majority opinion of golf experts; that the future of Tiger Woods is bright and he will get back to winning tournaments. Time may not be on his side, and his competitors on the PGA Tour are much more athletic than those he beat up 15 years ago. Still, there are few athletes as competitive as Woods and it’s hard to bet against him with the world watching.