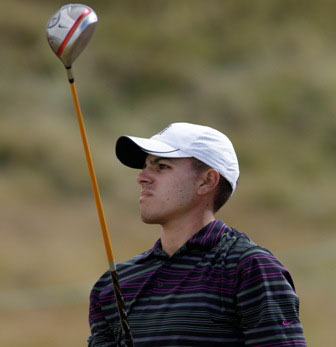 The dad is Black.

The mom is multi-racial.

He qualified for the U.S. Amateur at 14.

Stanford won the NCAA title on his watch.

Great shots are marked by a pronounced fist pump.

He is one of 125 golfers in the world with a coveted PGA Tour Player’s Card.

He wears the Nike swoosh.

Welcome, Black golfer Joseph Bramlett, to big-time professional sports.    Bramlett earned a PGA Tour card, joining Woods as the only players on tour of Black descent, and the first Black golfer since Adrian Stills in 1985 to earn admission to the most exclusive golf club in the world.

“It’s an honor. It truly is an honor,” the 22-year-old Bramlett said to the Associated Press, soaking in the moment. “Like I’ve said before, it’s been a long time. I’m just thrilled to see it start to change.”

In the final day of his first trip to Q-School, Bramlett shot a 4-under 68 on the Crooked Cat Course at Orange County National, rallying from 33rd at the start of the day to make the cutoff for a tour card by two strokes. He finished 11 under at the grueling, six-round final stage of qualifying school to tie for 16th.

Besides the grueling three days of Q-School, the young Black golfer also had to overcome two wrist injuries that hampered his last three years at Stanford since the Cardinal won the 2007 NCAA golf championship.

“Twenty months out of 24 is a very long time to be kept from doing something you’ve always loved to do and that you’ve identified with,” Bramlett, who first had a bone bruise that cost him seven months and then sat out 13 months with tendon and ligament damage from a fall off his bike, told the New York Times. “It’s a long time. I couldn’t even putt. I really couldn’t do anything. I could go to class, work out my legs, but just couldn’t do anything golf-related.

“There were times when I wasn’t sure when it was going to end or why it was taking so long to heal. Rehab, cortisone shots and waiting.”

Bramlett also told the Times he believed something he picked up from Woods while rehabilitating actually helped him become a better player when he returned.

“He told me that just because you can’t play golf doesn’t mean you can’t think about golf,” Bramlett said.

“He was right. It’s interesting. When you can’t play, you kind of look at your game from a different perspective. You pick up things that you wouldn’t see when you were doing it every day.”

Bramlett still has a long hill to climb. His best finish prior to his success at Q-School was a tie for 121st at the 2010 U.S. Open. His only significant title outside of NCAA competition is the 2010 Northeast Amateur Championship. He will be competing with seasoned professionals used to playing for a living on some of the toughest courses in the world. In many ways, the success he has enjoyed to date is just a tiny first step on a long, difficult road. The comparisons with fellow Black golfer Woods, right down to the Nike sponsorships they both enjoy, might make Bramlett’s professional life even more difficult.

“It’s always been a dream of mine to play on the PGA Tour and win major championships,” Bramlett said to the San Jose Mercury News. “I got the first half down. Hopefully I can keep it going and keep progressing.”

He will start with the Sony Open in Hawaii on Jan. 13. Like many others in our community, Regal will be watching with interest to see how far the newest Black golfer will go in his career.