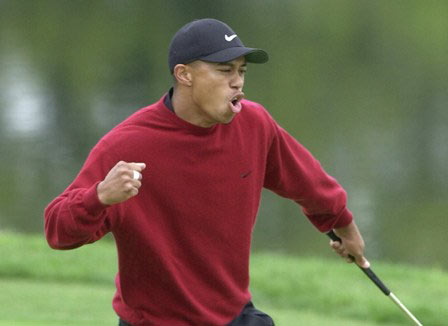 The phrase African Americans in sports conjures up many images, including soaring dunks in basketball, broken field runs in football, majestic homeruns in baseball and world records in track and field.

Thanks to Tiger Woods, one of those images is clutch play in the world’s most important golf tournaments featuring mental toughness and ruthless exploitation of the game and its best players. Yes, Tiger has brought golf into the forefront of African Americans in sports imagery, but so far that image has not translated into widespread participation.

Yes, the Journal of Black Studies tells us that African American participation in golf has doubled since roughly the time Tiger won his first Masters in 1997, but in reality that is more a reflection of how low the numbers were to begin with.

Tiger Woods has attempted to address the discrepancy with his First Tee program, which was founded after the 1997 Masters Tournament, and there has been some success. The most recent report says that 20 percent of First Tee participants are African American and 33 percent are female, two non traditional sources of amateur participation.

There are plenty of theories as to why this state of affairs exists. The old rout for minority success in golf used to be through caddy programs that allowed youngsters to play courses at the clubs for which they caddied. That is how Elder, Jim Dent, Lee Trevino and Chi Chi Rodriguez say they got their start. Today, the millions of dollars in revenue generated by carts have severely curtailed caddy programs at many country clubs and municipal courses.

Access also plays in a role for African Americans in sports. Regardless of race, getting to a golf course if you’re starting from the Bronx or the south side projects in Chicago is difficult, or at least more difficult than finding a basketball hoop or a track. Access is a phenomenon that affects many sports. For what reasons other than climate and culture would Canadians and Northern Europeans dominate the NHL, or a disproportionate number of baseball players come from warm weather climates like California, Texas and Latin America that allow for year round play on the diamond?

The name golf began as an acronym for Gentlemen Only, Ladies Forbidden. While those times have certainly changed, the game’s tradition includes exclusionary practices from some of its most well known clubs, including Augusta National which still has not admitted a female member. Tiger Woods alone, in less than a generation’s time, cannot change an entire culture.