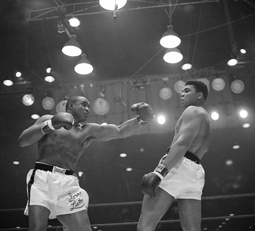 The rags to riches story of former heavyweight boxing champion Sonny Liston (left) is something out of a Hollywood gangster movie (Photo Credit: AP Photo).

ESPN’s documentary series “30 for 30” is the best thing since sliced bread.

With the recent debut of the film “Phi Slama Jama,” RegalMag.com began thinking about stories that deserve the “30 for 30” spotlight.

The publication came up with five stories that deserve to be told in our opinion.  Let us know if you agree or if we are alone in wanting to see these stories on the small screen.

Reggie Lewis’ death—Of all of the Dunbar Poets from the early 1980s, Reggie Lewis’ rise to fame was probably the least predicatble.  High school teammates were shocked that coaches at Northeastern University offered him a scholarship because he hardly played in high school.  Nevertheless, he became the perennial NBA All-Star during his tenure with the Boston Celtics, not his more celebrated teammates Bogues, Williams and Wingate.  However, he died in 1993 at age 27 from cardiac arrest, and his death is still looked at with suspicion to this day because of rumors of cocaine use.

UNLV basketball—The Fab Five gets all of the credit, but the UNLV Runnin’ Rebels of the early 1990s, and for that matter the Georgetown Hoyas of the 1980s, was the hip-hop generations’ first college basketball team.  They did things their way from their swagger to their Mafioso-looking head coach, Jerry Tarkanian.  They won the national championship in 1990 and went undefeated during the regular season the following year.  But accusations of NCAA violations and players’ alleged involvement with the Las Vegas gambling scene casted a large cloud over the program for many years.

The Life and Death of Sonny Liston—Former heavyweight boxing champion Sonny Liston’s rags to riches story should have been Hollywood legend.  Maybe it is on the level of Hollywood legend because it’s a story of organized crime, fame, riches, drugs and a suspicious death.  Liston (one of 25 kids) left his family in Arkansas for a life of crime in St. Louis by age 14.  He did time in prison, associated with the mob and eventually became heavyweight champion.  After his loss to Muhammad Ali in their second bout, his life became consumed with heroin addiction and alleged contracts on his life.  He died suspiciously in 1970.

1985-86 Houston Rockets—In 2016, ESPN debuted a “30 for 30” on the brief but magical run of Shaquille O’Neal, Penny Hardaway and the Orlando Magic in the mid 1990s.  That story was told a decade early by the Twin Towers (Hakeem Olajuwon and Ralph Sampson) and the Houston Rockets of the 1980s.  The team, which featured two future Hall of Famers in Olajuwon and Sampson, was supposed to be the future of the NBA, but injuries and cocaine addictions to three star players (John Lucas, Mitchell Wiggins and Lewis Lloyd) postponed their championship hopes, with the team (with just Olajuwon from the 1986 squad) settling for two championships almost a decade later.