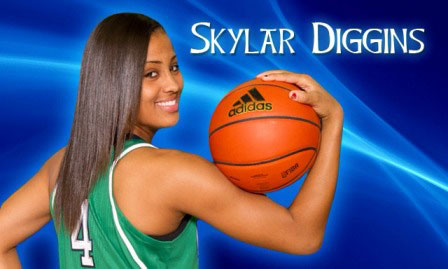 Sex And Skills Sell When it Comes to Female Sports

The 2011-12 college basketball season came to an end with the Baylor Bears women’s team capturing the Division 1 championship with a resounding 80-61 win against Notre Dame.

Player of the Year Brittney Griner, regarded by some as maybe one of the greatest players in history, led the Bears with 26 points, 13 rebounds and five blocked shots in front of a sellout crowd of 19,028 at the Pepsi Center in Denver.

Notre Dame, which was playing in the title game for the second straight year, was led by Skylar Diggins, a great player in her own right as well as one of the sport’s most beautiful female athletes, who scored 20 points.

The win capped off a historic season for Baylor and sports in general as the Lady Bears became the first team of any kind – college or professional – men or women, to finish a season 40-0.

Television ratings for the game, which was televised on ESPN, was up 13 percent from last year. The title game posted a 2.6 Nielsen rating.

Great teams, great players, great tournament, great championship game and a great historic season; so why is women’s college basketball an afterthought when it comes to sports fans?

With ratings up and players like Griner and Diggins making headlines, and some of the most beautiful female athletes playing the game, women’s college basketball still has a long way to go in capturing the heart of American sports fans. One reason may be where it’s positioned with men’s basketball.

Men’s college basketball is so immensely popular that the women’s game gets lost in the shuffle.

March Madness for men’s basketball is so big that it is said that millions of dollars in work time are lost by companies because so many people (men and women) are busy filling out brackets and following the first two days of first round games.

Also, the women’s title game is played just 24 hours after the men’s championship game in front of a much smaller TV audience, but on the hugely successful ESPN. But by that time, many basketball fans have moved on to baseball season and The Masters Golf Tournament.

“I think one of the problems is that the women’s tournament is right next to the men’s,” said Greg Johnson, 32, an elementary school teacher in Bend, Ore. “I think the women would get a lot more attention if they weren’t so close together. I mean, after the men’s championship you’re pretty much done with college basketball and ready to move on to baseball.

“Honesty, after the men’s championship you tend to forget that the women’s championship is even on TV. There are some good-looking players in the women’s game, but few people seem to notice because of the lack of exposure. If you want beautiful female athletes, you have to look at sports like tennis. To me, there’s no one hotter than the Williams sisters, Venus and Serena.”

That honor for beautiful female athletes goes to women’s tennis and women’s beach volleyball for obvious reasons. The short skirts and barely there bikinis showing as much skin as can be shown on TV is what get men going.

When it comes to women’s sports, sex still sells, and that is more than evident as several publications which ranked the most beautiful female athletes list athletes from these two popular sports as their most beautiful athletes.

What’s interesting about most of these lists is there are very few African American female athletes listed. The only ones included consistently are Parker, the Williams sisters, boxer Laila Ali and former disgraced track star and current WNBA player Marion Jones.

“I myself haven’t watched much female sports on TV, except for highlights that come on ESPN,” said Mychal Lynch, 29, who was a former basketball player at San Francisco State University and an all-state high school player from Los Angeles. “I do however work and coach several different lady youth teams like softball and basketball ages 5-15, and I can say that basketball is the sport I know the most about.

“Even though I don’t watch it a lot, I have attended a few UCLA women’s games in the past few years. My favorite female athlete is Dawn Staley….She was an Olympic basketball player a few years back. Looks did play a small part…But she was a good player.”

The most watched women’s sporting event in 2011 was the Women’s World Cup, which was watched by an incredible 13.5 million people. The United States team included goalkeeper Hope Solo who is also regarded as one of the most beautiful female athletes in the world.

The women’s World Cup had a huge following among women, but as far as women’s college basketball, that’s not the case.

“Actually, I don’t really follow women’s basketball,” said Kimberly Osborne, 47, a Lien Specialist from Los Angeles and an avid Los Angeles Lakers fan. “I did see one game in the tournament, but who was playing I don’t recall. It just doesn’t seem to be as exciting as the men’s, maybe because the schools don’t get behind them with the same excitement.”

In December 2010 Stanford defeated the University of Connecticut ending the Lady Huskies 90-game winning streak. The game posted a paltry 1.5 rating, but it was enough to be the highest ranked regular season women’s basketball game ever on the network.

Ratings for women’s college basketball have remained steady with slight increases coming during the tournament, especially when there are marquee feature players such as Griner and Diggins.

“I followed Notre Dame a little, because I’m a Notre Dame fan,” said John Hankins, 46, a detective in the Los Angeles Police Department. “I didn’t watch this year’s women’s championship game, because for some reason I just can’t get into women’s college basketball like I do other sports like pro football and basketball.”

Much of the problem here seems to be exposure. Women’s college basketball is one of the most exciting and competitive sports around, and features some of the most beautiful female athletes in the nation if not the world. Taking it away from the shadows of the men’s tournament, putting it on one of the big four networks with a huge advertising, marketing campaign, a huge audience while highlighting some of the best and most beautiful athletes just may do the trick and give the women and the game their own one shining moment.