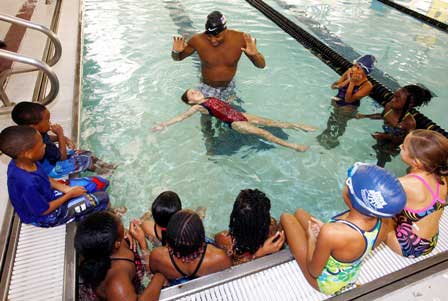 When one thinks of the Bronx several images come to mind: burned out buildings; a crowded retail environment; Yankee Stadium; housing projects; a zoo; and an overall area about 60 years past its prime.

What one does not think of is that it is a breeding ground for Olympic swimming success. Yet Cullen Jones has beaten incredible odds to become an Olympic gold medalist and world record holder. And he has celebrated his success by giving back to the community from which he came.

“The Bronx and Irvington are not exactly breeding grounds for swimmers,” said Cullen Jones to the New York Times. “I know I get a lot of extra attention because I’m a Black man in a sport filled with White athletes, that’s obvious. But I’m proud of what I’ve accomplished, and I hope that any success I achieve as a swimmer will allow young Black or Latino kids to realize that there are other sports out there besides basketball and football that they can make a career out of,” said Jones, whom Nike signed two years ago to a $2 million, seven-year endorsement deal. That is the richest contract given to a swimming sprinter.

“I would love to be their inspiration,” he said.

In his spare time, according to his website, Cullen Jones gives back to the community through motivational speaking, youth clinics, and even private lessons. Working with USA Swimming Foundation’s Make a Splash Program, he is dedicated to helping minorities learn how to swim.

No doubt the highlight of Jones’s career is the Olympic gold medal he won in Beijing as a member of the U.S. 4 x 100 meter freestyle relay team. His teammates in that world record setting run were Michael Phelps, Jason Lezak, and Garrett Weber-Gale. The team turned in a time of 3:08.24.

According to Sports Illustrated, with his Olympic medal as a prop, Cullen Jones barnstorms the country as the face of USA Swimming’s Make a Splash campaign, selling Black parents in particular on the life-saving value of swimming lessons. He jumps into city pools to teach kids how to swim and travels from his training base in Charlotte to Washington, D.C., to try to convince lawmakers that lives and billions of dollars could be saved with a nationwide investment in children’s “waterproofing” programs (in which kids are taught to swim in order to minimize their chances of drowning).

“Kids definitely want to be in the water,” Cullen Jones said to Sports Illustrated. “You teach them how to be water-safe, and the drowning numbers drop.” Nearly 4,000 Americans drown every year. Drowning is the second leading cause of unintentional death in children from ages one to 19, killing almost three kids a day in the U.S.

When Cullen Jones was five he almost drowned at a public pool, serving as an ironic kick-start to his own swim career. After his rescue at a splash pool in Pennsylvania, he became an age-group swimmer at Metro Express, a club team at the Jewish Community Center in West Orange, N.J.

He eventually attended North Carolina State University on a swim scholarship before turning professional in 2006 upon signing the contract with Nike. Cullen Jones goals now include an individual Olympic gold medal. He already has an individual gold from the Pan Pacific Games and is the current world record holder in the 50 meter freestyle.

He says an individual Olympic gold medal would raise his profile and allow him to do more good work in the community. Everyone at Regal will be rooting for an athlete whose heart; mind and body all seem to be in the right place.