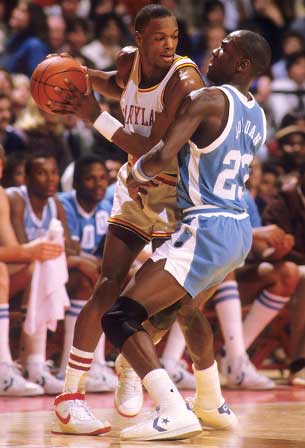 Maryland’s Len Bias (left) was by far one of the top college athletes of all time and the closest thing the ACC ever saw to Michael Jordan (Photo courtesy of Sports Illustrated).

What Could Have Been

Each year we hear of rising stars in colleges across the nation destined for greatest.

College athletes continuously fight tooth and nail for a chance to make it to the professional level.

While most top college athletes get the opportunity to live out their dreams playing professionally, there are still countless hopefuls that fall through the cracks, never getting the chance to live up to their full potential.

Here are the top 10 Black college athletes that never got the chance to go pro:

Top college athletes are typically known for breaking school records as well as leading their school to many victories and even championships. That wasn’t the case for streetball legend Demetrius “Hook” Mitchell.

His talent was simply undeniable. Standing at a mere 5 foot 10, Mitchell was well known for his 360 dunks over cars.

With his troublesome life on the streets and financial issues, Mitchell was never capable of having a stable college home to live out his full potential. In 21 games at Contra Costa College, Mitchell had 60 slam-dunks even dunking 6 in a single game.

Making his way to California State Hayward University, Mitchell had the potential of going to the NBA and even going on to becoming one of the greatest players in the league. However, his life of drugs and crime destroyed any chance of his playing professional basketball.

Maurice Clarett was a top college athlete that quickly rose to fame with the potential of going to the NFL but had a downward spiral fall from grace.

The running back from Ohio State University helped lead the Buckeyes to a 14-0 record and a national championship in 2002.

While Clarett certainly had the talent to one day make it to the NFL, he ruined any possible chance of that happening when he decided to unsuccessfully challenge the NFL’s draft eligibility rules in 2004, which requires players to be three years removed from high school. Although he eventually became drafted a year later, he ultimately was dropped and never played in the NFL.

HBCUs are not typically known for having top college athletes, but that wasn’t the case when streetball legend, Pee Wee Kirkland made his way to Norfolk State University.

Known for being one of the best streetball players of all time, Kirkland helped the Spartans win the CIAA title in 1968 with a 25-2 record.

He was drafted as the fourth pick in the 13th round by the Chicago Bulls but turned down the offer to make more money as a drug dealer.

Ed Warner was one of the most prominent top college athletes of the early 1950s who destroyed his chances at ever playing professional basketball.

Standing at 6 foot 3, Warner was well known for his quickstep and strength against all opponents. He was one of the stars of the CCNY Beavers men’s basketball team that became the only team to win both the NCAA tournament and the National Invitation Tournament in the same year.

Warner was also the prospective first round draft pick in the NBA. He damaged both his future and legacy when he involved himself in a point shaving scandal.

Sherman White was a basketball standout at Long Island University. During his final season as a senior, White was the nation’s leading scorer averaging 27.7 points per game. He was even only 77 total points away from becoming the National Collegiate Athletic Association’s all-time single season leading scorer.

White’s full potential was never discovered as he became yet another player that fell victim to a point shaving scandal that forced him to quit the team, never finishing his college basketball career.

He was also stripped of many honors, served an 8-month jail sentence as well as being prohibited from ever playing in the NBA.

There can’t be a discussion on top college athletes without bringing up the superstar quarterback out of University of Nebraska, Tommie Frazier.

Frazier is known to many as one of the greatest athletes to ever play college football. The four-year starter led the Huskers to back-to-back national championships in 1994 and 1995 winning the most valuable player titles in both games.

Despite his impressive resume, Frazier was never drafted into the NFL due to a blood clot in his left leg, which is a side effect of Crohn’s disease.

Raymond Lewis was a streetball player that sadly couldn’t take his talents out of the streets and into the NBA despite his ability.

As a guard for Los Angeles State University, Lewis quickly became one of the top college athletes coming out of Los Angeles.

As a freshman, he averaged 38.9 points per game and shot nearly 60 percent from the floor. He eventually was drafted by the Philadelphia 76ers in 1973 but after a nasty contract dispute during training camp, he walked out of his rookie year never to play in the NBA.

Ernie Davis was one of the greatest running backs to ever play college football.

In 1959 while at Syracuse University, Davis led the Orangemen to its first national championship following an undefeated season. The three-time All-American halfback went on to become the very first African American athlete to win the Heisman Trophy in 1961.

Not only was he one of the top college athletes ever to hit the field, he was also an upstanding guy to those who knew him.

Davis was so close to his dream of playing in the NFL after being chosen first overall pick in the NFL Draft. However, he never had the chance to play a professional game when he was struck with leukemia and died at the age of 23.

Hank Gathers was a college basketball standout at Loyola Marymount University whose life was suddenly cut short when he collapsed and died during a game. Standing 6 foot 7, Gathers was known for his dominating performances alongside Bo Kimble, helping to make them both top college athletes.

Gathers led his team in both scoring and rebounding during the 1987-88 season, averaging 22.5 points and 8.7 rebounds per game. The following season, he became the second player in NCAA Division I history to lead the nation in both scoring and rebounding in the same season when he averaged 32.7 points and 13.7 rebounds per game.

During his senior year, Gathers was expected to be an NBA lottery pick. However, on March 4, 1990, Gathers collapsed with 13:34 left in the first half of the West Coast Conference Tournament quarterfinal game against Portland. He died on the way to a nearby hospital and it was determined that he suffered from a heart-muscle disorder, hypertrophic cardiomyopathy.

Finally, we have arguably the greatest athlete to never make it to the professional level and one of the saddest stories in sports history; the tragic story of Len Bias.

More than 20 years after his death, his name still evokes powerful emotions.

Bias was an All-American college forward at the University of Maryland and an overall superstar in the world of basketball.

At 6 foot 8, Bias was simply unstoppable. There was no denying his talents as one of the top college athletes of all time. With his ferocious dunks and shot blocks, Bias electrified any gym he stepped foot into.

During the 1986 NBA Draft, he was the second overall pick by the Boston Celtics who had just won the 1986 NBA title just 11 days earlier.

Bias was living out his dreams with the potential to be what many believed to be the closest thing to Michael Jordan. Everything came to an end when Bias was pronounced dead less than two days following the draft, from cocaine overdose.

Douglas is a contributing writer for Regal Magazine, a publication dedicated to the African American community