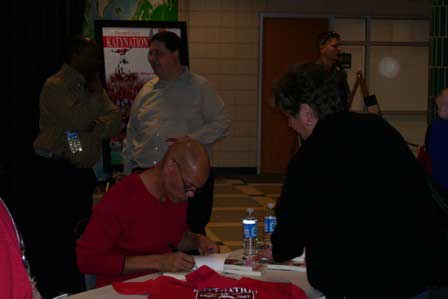 Dexter Clay and the Katy Nation

What defines a successful man?  Is it financial status and prestige?  On the other hand, is it using your God-given talents to make a difference in the lives of others?  For former professional football player and actor Dexter Clay, it is leaving the world a better place than he found it.

Many people dream of one day having their names in the bright lights, but few realize those dreams.  Clay is one of the few individuals who experienced the pros and cons of both Hollywood and professional sports, before dedicating his life to inspiring others by writing motivational books such as KatyNation.

“We often look toward those whom we have elevated to idol status for support, like professional athletes.  In reality, the real power of a community is the community itself,” Clay explains.

While playing softball, Clay received an invitation to attend the Houston Sports Writers luncheon by his coach Joe Spiegel.  At the luncheon, Clay met Houston Oilers wide receiver coach King Hill who offered him a personal tryout.  Impressed by Clay’s athletic ability, the Oilers offered him a two-year contract.

Unfortunately, one week before training camp Clay fractured his left index finger and had to compete for a roster spot at a clear disadvantage.  Oilers coach Bum Phillips placed him on waivers and the New York Jets picked him up.

“The next year I found myself two weeks before training camp with the New York Jets.  I fell through a moon roof, breaking my wrist and big toe and bruising two ribs.  The Sunday before the Denver (Broncos) game, the Turk came knocking on my door.”

Clay finished his professional career playing for the San Antonio Gunslingers of the USFL.

He next found himself in Hollywood living out of a pickup truck, while working at a Beverly Hills restaurant.  Nine days after walking away from the restaurant job, he ended up on the set of “Star Trek the Next Generation,” and received his first acting job.

Clay’s meteoric rise from homeless to Hollywood is perhaps what motivated him to become active in the homeless community.

“While in Los Angeles, I was the Executive Director of the National Homeless Plan.  There are over 300,000 homeless men, women, and children in and around the Los Angeles area.  We once rallied to bring attention to our cause.  Our only resistance was the city riot police,” Clay explains.

The former actor and athlete recently left Los Angeles, and has been back in Houston for over a year working on the inspirational story of the Katy High School football program in his new book KatyNation.  Katy, Texas is a small community west of Houston.

Clay believes readers will see themselves in his latest book.

“They will see the development and the history of a small town that has found a way to become a community of champions.  KatyNation is the history of a once-small community, more than it is a look back at America,” the author says.

Dexter Clay says he focused on the Katy football program because it gives a blueprint to other programs on how to be successful.  He believes it gives others common denominators that they can follow to be successful on the football field, as well as in life.

Anticipation for Clay’s book has been so great that it has received interests from film companies hoping to take the story to the big screen.  Clay’s management team is now reviewing contracts.

“To have a movie production deal on the table, even before the book is released, is quite frankly unheard of.  This is the opportunity that I find myself blessed with,” says Clay.

And, unlike many who find themselves the recipient of countless blessings, Dexter Clay is determined to pass those blessings on to others.  He is adamant about using his gifts to better the lives of others, especially those who are less fortunate.

Clay uses the power of words to inspire those around him, because he knows how it feels to succeed against all odds, and his mission in life is to see all succeed despite the obstacles.