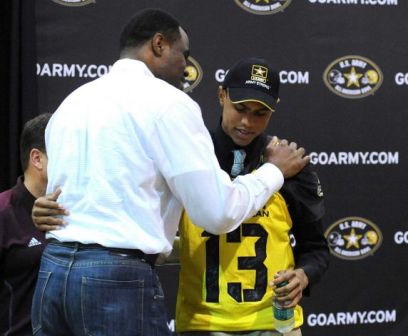 It’s supposed to be one of the signature days of a young man’s life and the culmination of years of hard work and success on the gridiron.

Family members gather around the young athlete on National Football Signing Day and pictures are taken as he signs his name to what is probably the most elite document of his young life.

In a few months, his life will change as he leaves home for the first time and takes his place with other elite high school athletes as an incoming freshman at a Bowl Championship Series football program.

This intense family moment has become fodder for the national media. The young player’s quest to find his place at a much higher level of competition is now everybody’s business.

The player is receiving nothing outside of tuition and room and board while a multi-billion dollar business swirls around him. At 18 or 19 he has become the engine that sells tickets, newspapers, magazines, fantasy subscriptions, and generates television ratings. He also becomes the foundation for seven-figure coaching salaries and stadiums with tens of thousands of screaming fans.

Earlier this month Sports Illustrated ran a major feature on football recruits Corey Robinson and Torii Hunter, Jr. because they are the sons of former NBA star David Robinson and Detroit Tigers outfielder Torii Hunter, respectively. The article essentially puts a bull’s-eye on the back of two youngsters who may or may not become impact players for the Notre Dame Fighting Irish.

So what does this do to the young player? It certainly communicates that the young athlete is a very important person. After all, why would all these lights, notebooks and cameras be around if he wasn’t?

It might also create some entitled behavior. While it’s no doubt true that most of these athletes have enjoyed massive positive reinforcement for most of the past 10 years, the attention that comes with National Football Signing Day is a whole new level.

Should we be surprised when these young players expect professors, fellow students, and even their dates to deliver what they want when they want it? And should we be further surprised if and when they react badly when the results they desire do not come their way?

So what else does National Football Signing Day bring us? It brings us more than 55 million hits on a Google Search. It brings us days of coverage on ESPN and similar outlets. It brings us hours of fodder for sports talk radio. All this on top of what might be considered appropriate local coverage from proud local media in various high school towns.

Most of all, National Football Signing Day brings us exploited workers, often Blacks, who are thrown into the major college football grinder where only a relative few will achieve their dreams and many will wind up injured or on the bench wondering what the heck just happened to them.

Yes, a few will go on to college football glory and an even smaller number will go on to brief careers in the NFL. Regal, however, wonders how many young athletes posing for the camera this week have calculated those odds and considered what their true place is in the college football hierarchy. Probably not very many…because all of them are smiling.