Are Fantasy Football Leagues for Money Healthy for Fans? 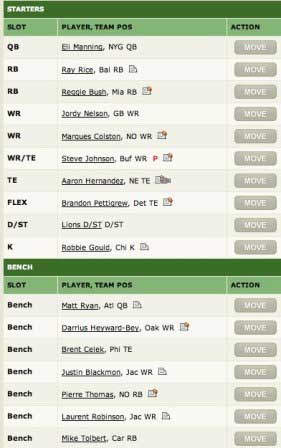 Fantasy football leagues for money have contributed to many fans spending less time on the job and more time adjusting their fantasy roster (Photo by Krystle Rich).

Is Fantasy Football Catnip for Gamblers?

Fantasy football leagues for money are a big deal.

It’s estimated by the Fantasy Sports Trade Association (FSTA) that 32 million people age 12 and above in the U.S. and Canada played fantasy sports in 2010. Participation has grown over 60 percent the past four years with 19 percent of males in the U.S. playing fantasy sports.

FSTA also estimates that fantasy football was a $200 billion per year industry in the U.S. as of 2010.

Of course most of this gambling takes place outside of the legal gambling enclaves of Nevada, New Jersey, and Native American reservations, meaning that most people playing in fantasy football leagues for money are, at best, scofflaws.

And there is also the issue of the affect such gambling has on families and individuals.

According to the Problem Gambling Institute (PGI), most people with gambling problems slowly lose control over how much time and money they spend gambling. They focus only on gambling and ignore other responsibilities and the harm their gambling causes.

PGI also says that those who become consumed by a gambling activity like fantasy football put stress on their marriages, can create shame for the family if losses mount, risk creating depression for their children, and are at increased risk for suicide.

When playing in fantasy football leagues for money, some players are likely to violate their companies’ computer use policies by compulsively checking statistics online during the workday, or using their company phone to negotiate trades, possibly putting their jobs in jeopardy.

What about the impact of fantasy football on the NFL itself?

For the most part, the league seems to have embraced fantasy football as something that creates greater interest in the league and drives more people to watch more games.

And the Washington Post says the NFL entered into a reported five-year, $600 million deal in 2006 with Sprint that was driven at least in part because of fantasy sports, allowing subscribers to draft and monitor their teams with their cell phones.

Fandom itself has also changed.

Instead of loyalty to an NFL franchise, many fans reserve their greatest loyalty for those on their fantasy team’s roster.

For instance, a fantasy owner might have the quarterback from one team and the running back from the opposing team on his roster, and end up hoping both teams score frequently.

As a result of this sort of passion, the NFL directed teams to show fantasy statistics during games on the stadium video boards beginning in 2011.

Former NFL quarterback Jake Plummer noticed the difference in the stadium experience through the course of his career with fans often rooting for statistics instead of a team, and states that fantasy football, “has ruined the game.”

Mark Charles of Danville, Calif. probably sums up the typical experience of someone who plays in fantasy football leagues for money.

This year he is playing in two leagues and feels good about his chances of winning again.

Though Charles says he roots hard for the Oakland A’s in baseball, the Los Angeles Lakers in the NBA, and the San Jose Sharks in the NHL, he has no such loyalty in professional football.

“My fantasy team is my NFL team,” Charles said.