Will Marijuana Addiction Be Death Blow for Many Athletes? 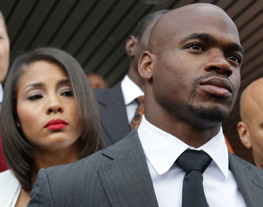 How Rampant is Marijuana Addiction in the NFL and MLB?

Marijuana is casting an ever-thickening haze across NFL locker rooms as marijuana addiction is running rampant in the NFL.

It falls in line with some of the recent findings.

Four of the 10 draft eligible prospects from the 2012 draft failed at least one school administered drug test for marijuana; two in 10 failed multiple drug tests per a CBS Sports report from April 2012.

About 70 percent of prospects at the NFL combine admitted to using marijuana, per an ESPN report in 2012.

A 2009 report by the NCAA stated 26.7 percent of all football players admitted using marijuana over the past 12 months, the highest number of any athlete group that was surveyed.

In the case of former LSU cornerback Tyrann Mathieu, it cost him millions of dollars in the NFL.

Mathieu, formerly named the “Honey Badger,” was on top of his game after earning All-American honors at LSU and was a Heisman finalist in 2011.

In August 2012, Mathieu was kicked off the LSU football team after he failed multiple drug tests at LSU.

Mathieu would not play football in 2012 and was arrested two months later with three former teammates after police found 10 bags of marijuana and drug paraphernalia in his Baton Rouge, La. apartment.

A sure first round selection, the Arizona Cardinals, which cost him millions of dollars in guaranteed money, would select Mathieu in the third round of the 2013 draft.

Mathieu has been slowed by injuries to his knee, and did see his first game action this season playing four snaps in Arizona’s 25-14 victory over the New York Giants two weeks ago.

Robert Mathis, a defensive end with the Indianapolis Colts who led the NFL with 19½ sacks last season, violated the NFL’s substance abuse policy and was suspended for four games for using performance-enhancing drugs.

NFL Network’s Ian Rapport reported the drug was Clomid, a drug that was “not approved by the Federal Drug Administration (FDA) for fertility in males and is a performance-enhancing drug that has been prohibited for years,” said NFL spokesperson Greg Aiello.

One example of how drugs ruined a player’s career is Dwight “Doc” Gooden.

Gooden was drafted fifth overall in the first round of the 1982 Major League Baseball Draft.

He spent just one full season in the minors, debuting at the age of 19 with the New York Mets at the start of the 1984 season.

He would go on to win the National League Rookie of the Year award that year and set several rookie records. Ironically, he won one year after Darryl Strawberry who also had drug abuse problems.

In 1985, he was dominant, winning a CY Young and leading the league in all the triple crown pitching categories: wins, ERA, and strikeouts.

He remains the youngest CY Young winner ever.

But he would never be as good again.

His decline has been attributed to many factors, but the two main reasons are early overuse and cocaine addiction.

In 1986, he helped the Mets win the World Series, but no-showed the team victory parade.

The team announced that their star pitcher had overslept, but years later it was revealed that he was on a cocaine binge.

Rumors of substance abuse began to arise during the 1986 offseason, which were confirmed when Gooden tested positive for cocaine during spring training in 1987. He entered rehab, which caused him to not start a game until June 5.

Despite missing one third of the season, Gooden actually had a solid year.

Gooden would go on to suffer several injuries over the next few seasons, during which his career declined significantly.

In 1994, Gooden again tested positive for cocaine and was suspended 60 days.

He tested positive yet again while serving the suspension, and was suspended for the entire 1995 season.

Gooden’s playing career ended in 2000, but he continued to have run-ins with the law over alcohol and drugs for the next several years.

In the end, what once looked like a sure fire Hall of Fame career ended as just another player.

Current major league player Josh Hamilton represents both sides of the coin on this one, the fall from grace due to drugs and then the resurrection after kicking the habit.

He was a blue chip prospect and first overall draft pick in 1999 by the then Tampa Bay Devil Rays.

The Rays then promptly signed him to a then-record $3.96 million signing bonus.

At the beginning of the 2001 season, Hamilton was rated the best prospect in all of baseball.

It was then that his career began to derail due to drugs and injuries.

At the start of the 2003 season, Hamilton left the team for six weeks, later admitting that during that span, he tried every drug he could get his hands on.

He would eventually take the rest of the season off for “personal reasons” after a 25-day suspension for violating Major League Baseball’s substance abuse policy.

He would enter rehab, but it didn’t take. All told, Hamilton would quit and re-enter drug rehab eight times.

At the start of 2004, he was again suspended 30 days and fined for violating the MLB drug policy.

The punishment indicated that Hamilton had already failed two or more prior tests.

After failing yet another drug test, MLB had had enough, and on Feb. 18, 2004, suspended him indefinitely.

In June 2006, MLB reinstated Hamilton, and he ended up playing 15 games for the short season A-ball Hudson Valley Renegades.

Despite playing only 15 games since 2002, and having only 89 at bats above A-ball, the Chicago Cubs selected him third overall in the Rule 5 Draft after the season.

The Cubs sold him to Cincinnati, and per the terms of the Rule 5 Draft he had to stay in the majors all year or risk being placed on waivers.

Cincinnati decided to keep him in the majors, allowing Hamilton to finally make his major league debut in 2007, just short of his 26th birthday. A successful, but unspectacular, rookie campaign followed.

During the off-season he was traded to the Texas Rangers for Edison Volquez.

The redemption was complete in 2008 when he was named to the American League All-Star team. He also participated in the Home Run Derby, where he hit 28 home runs in one round, a record.

Hamilton will be 28 early next season, and still has the time to put up an impressive career.

But what might have been a Hall of Fame career was derailed for several years due to drug use. Unlike many on this list, Hamilton has a great opportunity for a post-drug use career.

In 2008, Hamilton wrote a book called Beyond Belief: Finding the Strength to Come Back in which he makes no excuses and places no blame on anyone other than himself.

He takes responsibility for his poor decisions and believes his story can help millions who battle the same demons.

“I have been given a platform to tell my story,” he said. “I pray every night I am a good messenger.”

Carefully cultivated marijuana has become increasingly potent, and the question now is, is it time for a change of the testing standards in the NFL?

As recently as two weeks ago, discussions between the NFL and the NFL players association centered primarily on immediate discipline for players arrested on charges of driving under the influence of alcohol and drugs, and it also touched on marijuana as well.

And Wednesday, suspended NFL star Adrian Peterson admitted he “smoked a little weed” when questioned at an appearance in a Conroe, Texas courtroom.  It is possible that he could be re-arrested but had not by Regal press time.

“The (potency) level is so much greater in marijuana now, the secondhand smoke can get a positive test,” NFLPA president Eric Winston told The Associated Press. “Just a guy who is around it second hand, then to have to go into the program.”

One such player is Cleveland Browns wide receiver Josh Gordon, who is currently serving a season-long suspension after a positive test for marijuana, which his legal team said was caused by Gordon’s exposure to secondhand smoke in an unsuccessful appeal of his suspension. Gordon is a repeat offender of the league’s substance-abuse program.

One challenge the NFL faces is how to bring marijuana into the game as a pain reliever without conditioning its use as a recreational drug, while possibly facing a lawsuit on behalf of hundreds of former players complaining about the effects of prescription painkillers they say were pushed on them by team trainers and doctors.

Washington Redskins defensive back Ryan Clark didn’t want to pinpoint the number of current NFL players who smoke pot, but said “I know a lot of guys who don’t regularly smoke marijuana who would use it during the season.”

Commissioner Roger Goodell has treaded gingerly around the subject. Before last season’s Super Bowl he said the league would “follow the medicine” and not rule out allowing using marijuana for medical purposes.

An NFL spokesman reiterated that this month, saying if medical advisers inform the league it should consider modifying the policy and both sides have met to discuss revisions in the NFL’s anti-drug testing policy, then changes could occur.

The league does fund sports health research at the National Institutes of Health to the tune of $30 million in donations made in 2012.

But the science moves slowly no matter where it’s conducted and the NFL is in the business of playing football and not doing scientific research.

While marijuana becomes more and more acceptable across America everyday, the question is not so much it being used in the NFL, but how it’s being used and whether it will be for the benefit or harm of its current NFL players. The NFL’s conundrum is figuring a way to keep tabs on those who use marijuana recklessly or recreationally, while giving others a legitimate form of pain relief.