What if ‘Racist’ Sports Nicknames Geared Towards Black Culture? 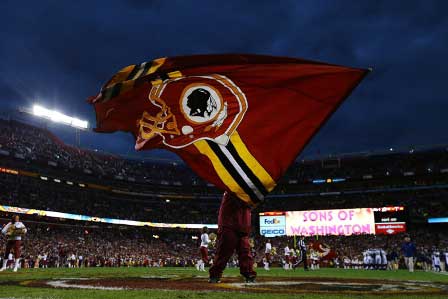 Nicknames like the Redskins are viewed as racist by many Native Americans (Photo courtesy of wtop.com).

What’s in a Name?

Racism in sports has been around for as long as we can remember. But not in the way you may think.

Sports nicknames have been stirring up controversy as some of their names are viewed as racist to certain racial groups; for example, the Washington Redskins and the Cleveland Indians.

Both sports nicknames are offensive to many Native Americans. While schools like Syracuse University and St. John’s University changed their sports nicknames, there are still other sports teams that have names that are considered to be racist.

For years, countless fans have been chanting theme songs and yelling out these names without a second thought about the racism that follows it.

“I think names of the sort have been desensitized because of sport culture,” said 25-year-old Nathaniel Mathison. “Most people don’t even realize the racial implications these names hold.”

Teams like the Redskins, the Atlanta Braves and the Indians have a huge fan base and many do not fully understand that these are derogatory terms for some Native Americans.

While fans may not intend to offend anyone and or anyone’s culture, the meaning of those terms still bring up painful memories for those old enough to remember what those terms meant years ago.

“It doesn’t bother me none,” said 24-year-old Ryan Roy. “But I would understand why certain people would want names like that removed. We’ve been pretty insensitive to Native Americans ever since we came to America.”

While sports nicknames have been in question for quite some time now, nothing has seriously been done in order to stop the racism that is subliminally encoded in the world of sports.

The Washington Redskins have been using the name since 1933 and although talks of a name change have been rumored, nothing has yet to be done.

Many believe that it is because they are geared towards Native Americans that the issue is not as widely recognized as it should be.

However, if racist sports nicknames were geared towards African Americans, would things be different?

“I would feel as if the organization was targeting, exploiting and even making fun of African Americans. There would be nothing reassuring about that,” said Mathison.

If the racist sports nicknames were geared towards another group of people besides Native Americans, the views of racism within sports would be different, according to many.

“A Native American woman equated ‘Indian’ or ‘redskin’ to ‘nigger,’” said 22-year-old Mikea Turner. “Many of them are offended.”

While many may be more nonchalant about racism towards Native Americans, it should be viewed just as importantly as racial slurs to any ethnic group.

“I feel like culture specific references should be avoided, especially if it’s seen as being derogatory,” said Turner.

If teams had even used sports nicknames based on African tribes, the reaction for some would not be reassuring.

“I would be more offended if they were named after African tribes,” said Mathison. “A part of me would think it is paying homage to African tribes by using their likeness. But then I think that fans, most notably White fans that support them.”

“I still think it’s a bad idea. I think sports can get more creative than associating a team with someone else’s culture,” said Turner.

Sports fans are typically very proud of their teams and the names they call themselves. With the acceptance of nicknames like the Redskins or Indians, one can only question what other things we can make excuses for in the name of sports?