What Can Be Done to Stop Trend of Athletes and Suicide? 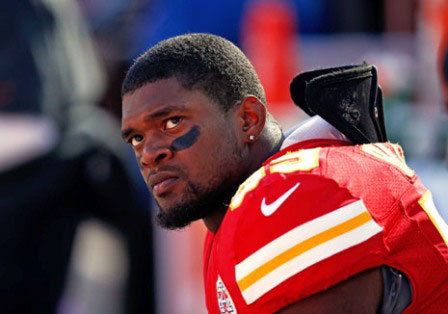 Kansas City Chiefs player Jovan Belcher recently shocked the sports world by taking his life and the life of his girlfriend (Photo by newyorker.com).

Athletes and Suicide: How to Stop this Alarming Trend

Professional athletes are thought to have it all; money, fame and success.

People see them on the big screen dominating the court or field with their million dollar contracts and think they have the perfect life.

Society seems to portray all of the glamour of these lavish lifestyles without necessarily showing that the superficial values are not everything.

Despite having a lot of material things, players are still capable of not having everything and still suffer from mental issues that make it harder for them to want to continue on without being given the proper treatment.

Athletes and suicide is something that many cannot comprehend because of the fact that these are people that would on the outside appear to have it all, when internally, who knows what they are dealing with.

The correlation between athletes and suicide is a strong one that many do not seem to understand because of the emphasis that society puts on material values.

“I believe that society makes most people think once I reach a certain salary, I will be happy,” said 22-year-old Krystle Rich. “That is the biggest misconception.”

According to Psychology Today, the six reasons people commit suicide are depression, psychosis, impulsiveness, a cry for help, philosophical reasons or they made a mistake. A lot of these problems are issues that people do not associate with athletes. They are viewed to be such strong, masculine figures incapable of emotional difficulties like these.

The issue of athletes and suicide is something that isn’t as publicly broadcasted as it should, causing many people not to feel the need to seek help, or to try to take matters into their own hands.

“These players may not want to admit to suffering from depression, as it may make them seem ‘less of a man,’” said Rich. “Depression exists at all income levels, from poverty to Beverly Hills.”

There is a huge amount of pressure that these players have to endure on a daily basis. When these players are viewed to have everything they could possibly imagine, people do not think about the things that people need that money can’t buy; like the emptiness that cannot be eliminated by a million dollar contract.

The money and fame that they achieve as compensation for all of their hard work, is always glorified. People only see the great things that all of the material possessions get for players, but they do not see how unfulfilling just those things alone can be.

The fact that there is an issue of athletes and suicide says it all.

“‘Money can’t buy happiness;’ everyone knows this saying, but how many of us truly believe in it?” points out 22-year-old Brandon Victor. “This misconception has caused, and seemingly always will cause, people to seek the material rather than seek something more fulfilling.”

Professional and college sports teams need to do something to help deal with the well being of their players.

There are countless precautions and measures teams take to ensure that players are physically strong and capable of playing the game. Just as much time, energy and money should be spent on their mental strength. Precautions should be taken to help deal with athletes and suicide.

“The number one thing that sports teams can do to help their players cope with their issues is directing them to proper professional help,” said Victor.

By providing them with professionals they can talk to and feel comfortable opening up about the real life issues they deal with could possibly help prevent more problems with athletes and suicide.

Since society helps paint this perfect image of the life of an athlete, many people cannot fully understand the struggles these players endure on and off the field and court.

The pressure society places on these players makes it hard for many of them to feel safe about opening up about their true feelings and the real issues they are dealing with. This makes it easier for them to ultimately take matters into their own hands and this is when the issue of athletes and suicide becomes an issue.

If more attention is given to these players and teams provide them with the help that they need, many lives could possibly be saved.