Should Athletes Be More Easily Forgiven for Cheating in Marriage 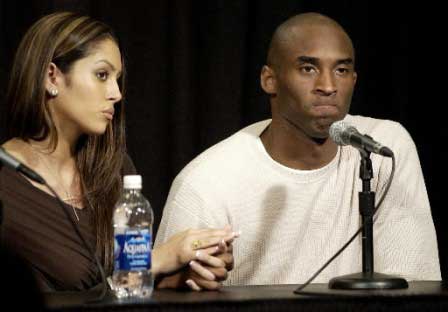 Despite their best efforts, many married athletes like Kobe Bryant have succumbed to the temptation that comes with a high-profile lifestyle (Photo courtesy of bleacherreport.com).

For most professional athletes, their relationship to the sport they play is much like a marriage.

They become 100 percent invested and committed to whichever sport they are associated with.

With their chaotic lifestyles of constantly being on the road and the endless attention from women, some question whether or not cheating in marriage is inevitable for athletes.

“I believe that society has allowed the act of infidelity, especially amongst male athletes, to be seen as acceptable behavior,” said 22-year-old Alexis Chinery. “It should not be said that athletes inevitably succumb to this act of infidelity in their marriages, but that through societal acceptance and creation of excuses for these athletes’ behavior, we ultimately give them approval to cheat.”

While no one would like to think that anyone should be exempt from cheating in marriage, it has been seen time and time again that professional athletes go by a different set of rules.

“Athletes are held to a higher standard than your average person. Not only in relationships, but in everything,” said 22-year-old Taylor Johnson. “They just have to work at their relationships extra hard. Most do not have the extra stress that finances put on a couple, but in exchange they have to deal with distance and temptations.”

Many use an athlete’s lifestyle as an explanation or excuse for infidelity. Professional athletes are constantly on the road and traveling and there is temptation lurking in every city.

“There is a considerable amount of temptation because many of these athletes have more money than they know what to do with,” said Johnson. “You see a lot of people trying to get money out of the athletes so they have people throwing themselves at them. Ultimately, a slip up from an athlete is a big deal because of the fact that they are role models for younger generations.”

Athletes are public figures and their lifestyles and day-to-day actions are constantly on display.

While not all athletes fall victim to cheating in marriage, the ones that do, help to form the stereotype of athletes being unfaithful in their relationships.

Because of those stereotypes that are constantly on display, some believe that women should know what they are getting themselves into when dating a professional athlete.

“These women that get involved with athletes and celebrities know what they’re getting themselves into. No woman deserves to be stepped out on, but it is the world we live in,” said Cyril Mpacko.

“Lots of women, in my opinion, know that their men cheat but stay with them due to the status it brings them. If more women left their relationships after the infidelities come to light then it would serve as a deterrent to that kind of activity.”

Despite their chaotic lifestyle that creates such temptation; many still do not believe that athletes should be forgiven more easily for cheating in marriage.

“Being an athlete is a career choice and should not be used as a pass or excuse,” said Chinery. “When you make the personal decision to get married, say your vows and make a committed promise to your spouse and God, you should be held accountable for your actions…”

“Male athletes should face the same consequences as any other person,” said Johnson. “They chose the life they live and have to pay the price. Their relationships take work just like everybody else’s.”

“I believe they should respect the relationship. Honestly, don’t commit yourself if you know you still have temptation inside of you,” said 33-year-old Joe Shelton.

While infidelity may not be something that society could ever fix, some believe that society’s views on the matter could potentially influence how the issue is handled.

“Once society as a whole embraces doing the right thing, it will be more acceptable and common for athletes to commit themselves to whomever they are involved with,” said Mpacko.

Athletes are without a doubt held to a different standard in many situations they find themselves in. However, in the case of cheating in marriages, the reasons why infidelity occurs may be understood, but for many sports fans athletes should still be treated just like anyone else.