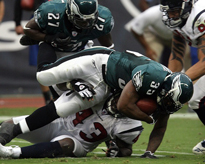 Some members of the Super Bowl champion Philadelphia Eagles will visit the White House in June. Some will do community service instead.

Contrary to popular belief, the Philadelphia Eagles will visit President Donald Trump and the White House on June 5 to celebrate their first ever Super Bowl win.

Many of the Eagles players, like Malcolm Jenkins, supported Colin Kaepernick’s decision to kneel during the national anthem in 2016, while also criticizing President Trump.

Kaepernick said at the time, that he would not stand for a flag or an anthem that has a history of oppressing Black people.

Regardless, the mix of sports and politics continues to cause controversy.

Along with Jenkins, Chris Long and Torrey Smith have said in the past that they will not attend because of their dislike of Trump.

The entire Eagles team will travel to the nation’s capital. Some will visit the White House, while others will do community service instead.

Instead of visiting the White House, the Warriors paid for disadvantaged Washington, D.C. children to attend the National Museum of African American History and Culture.

Many Puerto Ricans criticized Trump for his handling of the United States territory in the aftermath of a devastating hurricane.

Eagles quarterback Carson Wentz said that if the majority of the team wants to visit the White House, he would attend.

“I think it’s just a cool way to receive the honor kind of nationally and be recognized,” said Wentz. “I don’t personally view it as some people do. Everyone has their own opinion on it. I don’t view it as a political thing whatsoever.”

Trump caused a lot of controversy in Sept. 2017 by saying that NFL owners should fire players who kneeled during the “Star Spangled Banner,” calling players that protested, S.O.B.’s.

Since Kaepernick took a knee in 2016 and Trump criticized the NFL in 2017, the league has tried to limit the controversy surrounding the National Anthem, which many players have used as a time to protest systemic racism and police brutality targeting the Black community.

After Trump’s controversial criticism of the NFL in 2017, more players took a knee to protest Trump’s comments, many calling the comments divisive and un-presidential.

Players from the Houston Texans had remained neutral on the protest until team owner Robert McNair made comments saying that the owners could not let the inmates run the prison.

The following game, many of the Texans took a knee to protest the owner’s controversial comments.

McNair later apologized for his remarks, before saying that he regretted apologizing in the first place.

Trying to mute the National Anthem controversy, which many have said contributed to the declining television ratings in the NFL, team owners (San Francisco 49ers owner Jed York abstained) decided to require players to stand if they are on the field during the “Star Spangled Banner.”

If players do not want to stand for the anthem, they can remain in the locker room until the song concludes.

However, if players take a knee during the anthem, their team will face a financial penalty.

Trump commended the NFL owners in an interview with “Fox & Friends.”

“Well I think that’s good,” Trump continued. “I don’t think people should be staying in locker rooms. But still I think it’s good.”

Despite the fact that his comments from last year received a lot of attention, Trump does not believe he deserves credit for the NFL rule change.

However, the country still has a lot of “smart” people who disagree, totally, with the NFL’s mandate that players stand during the National Anthem or remain in the locker room.

The NFL Players’ Association also voiced their displeasure with the decision, claiming that the owners did not even consult with them before announcing the new policy.

Jenkins said he disagreed with the league’s decision, saying that it essentially violated their constitutional rights to protest.

The Eagles’ defensive back said, however, that the decision would not silence him on the issues.

York has previously supported the players’ right to protest.

The 49ers owners stated that he might halt concession sales during the National Anthem because he said that he does not want to profit off of the anthem.

He further stated that halting concessions sales would force fans to honor the flag and the anthem.

While New York Jets owner Christopher Johnson has said that he will pay his players’ fines if they choose to protest, York has not yet stated his policy on that matter.

“I think that’s a conversation we’ll have with our players and I’m hopeful that, with our players, they know that I will stand for them,” said York. “I’ve stood up for them in the past, I’ll stand up for them in the future…But I’m not going to force anybody to do anything that they’re uncomfortable with—and I think this policy, from that standpoint, allows players to have time and space in the locker room if they choose not to come out.

“Again, is it the perfect solution for me? I think [NFL Commissioner] Roger (Goodell) said very clearly, it’s a compromise. But this has to be a conversation, I think, between me and our players and figure out the best way to move forward.

“Again, the goal, I think, has always been to progress social justice reform and that’s what I want to stick to, is making sure that we progress in that movement.”

The NFL has kept its word by finalizing a $90 million pact with the Players Coalition to partner with causes that help the African-American community.

Despite his outspokenness on social issues, Jenkins said that none of the new developments have softened his stance against Trump.

“At this point, I’m not interested in any discussions on anything right now just with the climate that’s been going in the White House.”