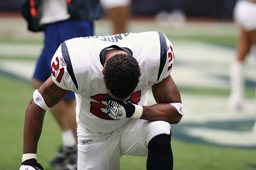 Many NFL players have protested against systemic racism and police brutality by taking a knee during the national anthem since the 2016 season.

NFL to Donate Money to Causes Fighting for Social Justice

The National Football League (NFL) has just made an expensive statement on social justice.

But depending on who one talks to, the NFL’s recent pledge to donate money to several organizations is a bold statement in favor of justice or just lip service to quiet the NFL protests that have stirred controversy since the 2016 NFL season.

According to CBSSports.com, “It was reported Thursday that the NFL had come to an agreement with the Players Coalition to donate $89 million over seven years to various social justice causes.  The deal ‘represents the NFL’s largest contribution to a social issue, surpassing that of Salute to Service or Breast Cancer Awareness/Crucial Catch,’ according to a report from ESPN.com”

While Philadelphia Eagles defensive back Malcolm Jenkins of the Players Coalition says he will not protest after the donation, all the players are not on the same page with Jenkins.

Eric Reed, a former teammate of Colin Kaepernick with the San Francisco 49ers, called the deal a “charade” and insinuated that the NFL might just be transferring funds from Salute to Service and Breast Cancer Awareness to organizations fighting for social justice, which means that NFL owners are not really spending any extra money.

If Reid’s allegations are true and money is taken from the military and breast cancer survivors, the NFL could possibly upset even more fans.

According to CBSSports.com, “Reid…told Slate that Jenkins was the only protesting player that agreed to the deal, and that the deal has the support of around 1 percent of NFL players.”

The protests for social justice and against systemic racism and police brutality began after Kaepernick refused to stand during the national anthem in protest during the 2016 NFL season.

Rather than sit during the national anthem, players like Kaepernick began taking a knee, which some see as more respectful than sitting during the “Star Spangled Banner.”

Nevertheless, some NFL fans viewed kneeling during the national anthem as a protest against the anthem and the military, which many saw as unpatriotic and/or disrespectful.

Unfortunately, the controversy can sometimes be broken down along racial lines, with many of various races saying that they will protest the NFL for the foreseeable future because of the national anthem controversy.

Many White fans say they will not watch the NFL until the players stop protesting.

On the other hand, many Black fans say that will continue to protest until an NFL team signs Kaepernick.

Obviously, the NFL takes the matter seriously because television ratings have dropped, probably for various reasons including boycotts because of the political protests and the belief that Kaepernick is being blackballed by the league.

Regardless, the NFL does seem at least financially committed to easing tensions by donating the money to social advocacy groups like United Negro College Fund (25 percent), Dream Corps (25 percent) and to the Players Coalition (50 percent), which has filed paperwork to become a nonprofit organization, according to Newsweek.com.