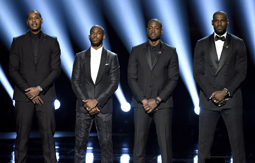 The Passing of the Torch

For decades, African-American athletes have faced scrutiny for not speaking up on social issues and staying neutral on polarizing issues in order to protect their brand.

African-American athletes went from boycotting the 1968 Olympics to making infamous statements about refusing to be involved in political activism because Republicans also buy sneakers, to paraphrase Michael Jordan.

However, the days of the apolitical athletes have disappeared, and this current generation of stars has taken the torch of political activism that has been carried for so long by athletes like the late Muhammad Ali, Jim Brown, Bill Russell and Kareem Abdul-Jabbar.

“The events of the past week have put a spotlight on the injustice, destruction and anger that plague so many of us,” said Anthony.  “The system is broken.  The problems are not new.  The violence is not new.  And the racial divide is definitely not new.  But the urgency to create change is at an all-time high.”

On Periscope, Smith stated that the current huge NBA contracts provided players an opportunity to donate 10 percent to underprivileged communities, which could possibly lead to sponsors matching their donations.

“When you’re making $30 million per year, your communities can live well, can change the landscape of how the whole community is affected,” Smith told Huffington Post.  “I think that unfortunately it’s now our civil duty to do that.”

Athletes across the sports spectrum have answered that duty by engaging in political activism.

Members of the WNBA’s Minnesota Lynx recently caused controversy by wearing black t-shirts with the names Philando Castile and Alton Sterling on the back along with the phrase Black Lives Matter and the Dallas Police Department shield.

However, four off duty Minneapolis police officers walked out of the Lynx game in protest over the t-shirts.

ESPN’s “His and Hers” co-host Jemele Hill said “good riddance” in response to the actions of those officers, saying they misunderstood asking for police accountability as disrespecting all police officers.

Despite some officers thinking the Black Lives Matter movement is anti-police, athletes like Anthony voiced their support for officers after the Dallas murders.

In an op-ed, Anthony wrote that it is time to stop talking and using hash tags, and make a real difference.

He pointed out that athletes fear losing endorsements if they speak out but need to stop worrying about it.

“Because if that’s the case then you have to question the kind of people that you’re doing business with and ask yourself where their heads and morals are at.”

Although he did not claim to have the answer to the racial divide, Anthony went on to write that there needed to be respect on both sides, from law enforcement to civilians.

Whatever the end result, no longer can critics say that African-American athletes do not speak up for their community.

This new generation of athletes is engaged in political activism and has decided to make a difference even if that means sacrificing popularity and endorsement dollars.