Managing Money for Athletes Can Come Down to Greed, Trust 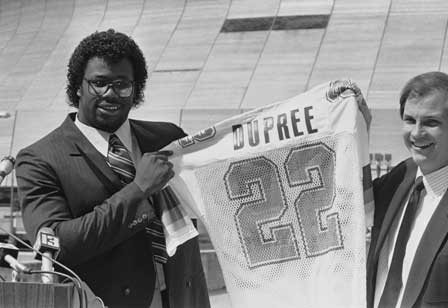 It’s a common tale, because there is always money for athletes.

A physical genius from an impoverished background signs a multi-million dollar pro sports contract. He immediately brings his homies with him to form a posse, buys his mom a house, soon owns multiple homes and cars, and before long has amassed massive overhead. The need to maintain appearances leads to loads of other luxury purchases, then comes sketchy investments from shady characters, and finally, perhaps, multiple child support payments to gold-digging women he has impregnated in hotel rooms around the league.

Often, that first contract is the best or only contract the player signs.  Maybe the player gets injured; or perhaps the holes in college are a little wider than the holes in the NFL, or maybe it’s a bit more difficult to get that jumper off in the NBA, or maybe a professional curve ball is a lot different than a high school or college bender.

The reason really doesn’t matter. Pro sports is a brutal business and as soon as it is determined that the player can’t cut it the money for athletes will stop. And what once seemed like several lifetimes worth of money starts to look a bit tight with the posse, the investments, the houses, the cars, and the kids the athlete barely knows. If an unscrupulous agent or money manager has entered the picture, the athlete’s financial life is ruined once the cheering has stopped.

The most recent athlete to come into focus with such a tale is Marcus Dupree. The Oklahoma running back received a $1.2 million bonus from the USFL after his freshman year in college. The money was spread over ten years, which means the real value decreased over time. Then, Dupree suffered a serious knee injury which essentially wiped out his earning power. His story was recently told on ESPN.

Dupree was the sole support for his mother and brother, left school early, received questionable and ultimately scandalous financial advice, incurred expenses and wound up nearly broke when football was over. Though he eventually put his life back together and seems happy now, he is not living the luxurious lifestyle that seemed inevitable when he left college.

Former NBA star Antione Walker provides another cautionary tale. In 12 seasons he earned more than $110 million for his basketball skills. Now, according to Shira Springer of The Boston Globe, Walker owes more than $4 million to his creditors and is facing felony check fraud charges in Las Vegas. All of this at the age of 33.

How? Springer says fairly easily. “[Walker] liked to move in an outsized entourage; his mother estimates that, during his playing days, he was supporting 70 friends and family members in one way or another. And speaking of his mother, he built her a mansion in the Chicago suburbs, complete with an indoor pool, 10 bathrooms, and a full-size basketball court. […]

There are more stories about money for athletes. Darryl Strawberry’s money went up his nose, Cadillac Anderson blames poor choices and bad friends, and Joe Louis’s ignorance of the tax code gave him a lifetime of debt. What every newly rich pro athlete needs is a prudent money manager with tremendous influence over him who can guide him into financial responsibility while he navigates his new peer group that seemingly values irresponsibility and flash. Good luck with that.

Money for athletes is a beautiful thing; until it’s not.