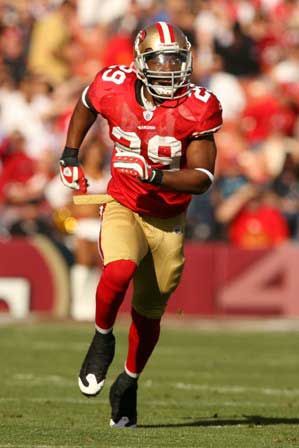 Running back Glen Coffee recently retired from NFL after one season to follow his Christian faith (David Gonzales/AP).

Millions of boys, and perhaps more than a few men, dream of taking the field Sunday afternoons to compete in the National Football League. Many dedicate years of their lives to the hope of playing in the NFL, only to come up short because of injuries, bad luck, or a lack of ability.

Glen Coffee is one of the 2,000 young men who lived the dream last year. As the primary backup to Pro Bowl running back Frank Gore, Coffee rushed 83 times for 226 yards and one touchdown in 14 games, two of them starts. This was on top of a stellar career at the University of Alabama where he rushed for more than 2,000 yards in three varsity seasons and was a first team All SEC selection in 2008. He was drafted by the San Francisco 49ers in the third round of the 2009 NFL draft.

By that time, though, Coffee began to feel a different calling like many Christian athletes. While at Alabama, Coffee became a born-again Christian and his single-minded approach to football became divided.

“It was a struggle for a long time. Actually when I look back I feel I never should have entered the draft in the first place,” Coffee told the Sacramento Bee. “Football was no longer my dream. I found Christ in college. It changed my views on everything. But I still was a football player because it was expected of me, it was something I did all my life. I was basically wasting the (49ers’) time.”

Coffee has also said that he is not necessarily going directly into Christian Missionary work like other Christian athletes. “I didn’t leave football to go into the ministry,” Coffee said to the San Francisco Chronicle. “If a door opens up for me, then I will take it, but that’s not the reason I left.”

In the short term Coffee says he will return to Alabama to complete the six units required for his undergraduate degree in consumer affairs and then pursue graduate work.  Coffee adds that this path will leave him in a better position to go into Christian Ministry should that call ever come.

Fans seem to respect Coffee’s decision. “He should do what he wants to do,” said Mark Charles, 15, a sophomore at Monte Vista High School, about 35 miles east of San Francisco. “I’d rather the Niners have a guy like (Brian) Westbrook (Coffee’s replacement) who wants to be there than someone looking for something else. Coffee wasn’t going to play that much anyway.”

“He’s in a different world,” said lifelong 49ers fan Jack Saunders, 65, of Oakland. “This reminds me of the Pat Tillman case.  We’re always shocked when somebody chooses an idea over millions of dollars, simply because so few of us ever see a million bucks on the table, and perhaps even fewer have the capacity to be truly moved by an idea.  This man is the rare genuine article.”

Christian athletes leaving behind pro sports careers are nothing new for Bay Area fans. Just this past winter outfielder Grant Desme retired after several promising minor league seasons with the Oakland A’s to enter the seminary in hopes of becoming a Catholic priest. The 2007 second round draft pick had just been named MVP of the Arizona Fall League when he told the A’s he was answering a call to a higher league.

Oakland Raiders running back Napoleon Kaufman retired in 2001 at 27 to enter the ministry full time. Today he is the senior pastor at The Well Christian Community Church in Dublin, Calif. Further back, the San Francisco Giants of the 1970s had several born again Christian athletes that formed a “God Squad” of informal ministry within the team’s clubhouse. Those Christian athletes played out their baseball careers.

The most famous of all Christian athletes with a public profile based on his beliefs may have been A.C. Green, who played on three NBA championship teams with the Los Angeles Lakers. Green is known as deeply religious and is well-known for proclaiming that he began and ended his NBA career as a virgin. During his playing days, his teammates would frequently send women to tempt him to compromise his morals. Instead, Green would respond by calmly quoting scripture. Currently, he runs youth camps through his A.C. Green Youth Foundation promoting Christian abstinence until marriage. He finished his career with the Miami Heat in 2001 and married in 2002 when he was 39.

Regal Magazine congratulates Coffee and other Christian athletes on their decision and truly hopes they find inner peace.