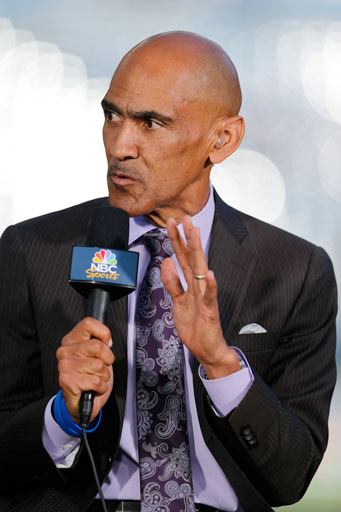 Former NFL coach Tony Dungy faced extreme criticism during the offseason when he said he would not have drafted Michael Sam, the first openly gay NFL player, because of the distraction (Photo Credit: AP Photo/Ric Tapia).

Why Christian Athletes and Coaches are Still Being Discriminated Against

In the first centuries of Christianity, Christians were thrown to the lions in arenas to be jeered by mocking crowds.

Are Christian athletes today being more critized for their religious beliefs or are athletes with a more secular view being more celebrated?

In the NFL, more than 35 players have been arrested since Jan. 1 on charges ranging from driving under the influence to drug possession to domestic violence.

Former NFL quarterback Tim Tebow is the most celebrated pro athlete who exemplifies his belief in Jesus Christ.

But Tebow further exemplifies his Christianity as he has preached the Gospel to schoolchildren and in entire villages and assisted in medical care.

NFL writers honored Tebow in 2012 with the Good Guy Award for his qualities and professional style in helping pro football writers do their jobs. Now he gets to practice the same skill as he is working as an analyst for the SEC Network.

Sam is currently on the Dallas Cowboys practice squad.

Dungy who played and coached in the NFL, leading the Indianapolis Colts to a Super Bowl in 2006, would have been one of the many coaches if he still was coaching that would have passed on Sam in the NFL draft.

“I wouldn’t have taken him,” Dungy told the Tampa Tribune, according to ProFootballTalk.com. “Not because I don’t believe Michael Sam should have a chance to play, but I wouldn’t want to deal with all of it. It’s not going to be totally smooth… things will happen.”

Time will tell what kind of “things” Dungy may be referencing.

Dungy the next day tried to clear his comments.

“What I was asked about was my philosophy of drafting, a philosophy that was developed over the years, which was to minimize distractions for my teams,” Dungy said. “I do not believe Michael’s sexual orientation will be a distraction to his teammates or his organization.  I do, however, believe that the media attention that comes with it will be a distraction.”

Dungy did say he would not have a problem with Sam, a seventh-round draft pick, on his team and that his sexual orientation would not play a part in his evaluation process.

Avoiding distraction from the media was a reason why many teams avoided Tebow after his release from the New England Patriots.

It would be interesting to ask Dungy how he’d like having guys like Tebow or Johnny Manziel on his team.

Football is not the only sport in which Christians face the mockery of the secular sports media.

Olympic athletes were not spared in the anti-Christian animus.

Olympic gold medal winning gymnast Gabby Douglas was ridiculed for being “so, so, so into Jesus” and some complained even when Douglas was merely expressing her personal philosophy by posting #christmotivation quotes in her Twitter feed or talking about how she mediates daily on scripture because there’s always that lurking hint of proselytism.

It’s often overlooked that the sports media industry has every bit the left-wing bias as “hard news” organizations.

After all, the unhinged former MSNBC host Keith Olbermann got his start at ESPN.

Since most sports reporting and analysis doesn’t lend itself to political opining, sports journalists don’t have much chance to strut their ideological stuff.

One exception is the intersection of sports and religion.

From the militant secular perspective, the two should never connect.

An athlete can lead an unsavory life or even be a criminal and win a pass from the media, but outspoken Christian athletes face a media blitz against their faith.