Will NBA Fans Become Fans of Overseas Basketball in 2011-12? 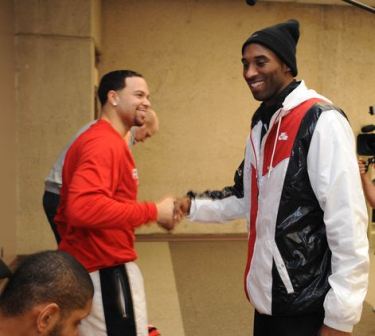 Overseas Basketball not for Everyone

The NBA has locked out its players, putting the 2011-12 season in jeopardy. Like some NHL players did five years ago, many NBA players are considering taking their talents overseas to play and continue to draw a paycheck until the labor situation is resolved.

Kobe Bryant is among some prominent players considering overseas basketball. This leads to the following question: Is it the league or the players who make watching the games so enjoyable?

Former NBA player Lance Allred, best known as the first profoundly deaf player in the NBA, provides firsthand testimony in his recent book (Longshot: The Adventures of a Deaf Fundamentalist Mormon Kid and His Journey to the NBA) that players in Europe could be in for a culture shock. Allred describes lousy practice conditions, crummy hotels and constant difficulty getting paid. In all, Allred played for four different teams and none of the situations worked out well.

There are also issues from the European teams. They would be concerned about players jumping back to the NBA should a settlement be reached. According to NBC Sports.com, the top-flight European teams are not going to sign a player — even an elite player — for less than a guaranteed full season. Top teams are not going to rent a player, they don’t need to. Lesser teams can’t afford to bring over stars.

But suppose star players followed the lead of Joe Thornton and other NHL stars and played in Europe this season. And suppose some of those games were televised or made available via PCs, would the fan’s eyeballs and advertising dollars follow?

For Steve Kurzet, 53, who lives in the basketball hotbed of North Carolina, the answer is a profound no. “As much as I love the game, I can barely watch a regular season basketball game on TV without channel surfing. I don’t see that getting any better or more interesting just because Kobe, LeBron, and a few of the other glitterati decide to play in Europe,” he said.

“I wouldn’t waste any of my TV viewing currency on watching or following NBA players playing overseas.”

Another NBA fan, Andrew Sisolak, 52, an attorney in Monterey, Calif. and Duke alum, isn’t enthusiastic but has some interest in overseas basketball under certain conditions. “If James, Kobe, Wade, etc. go there and it is televised I would watch some out of curiosity,” Sisolak said. “If not televised, I would not follow it particularly, because if you take away the factor of following a given player (unless a Dookie), and since I do not have a strong rooting interest in a particular NBA team (if I did I might have more interest in its set of players), it would have no draw to me.  Now if they took an entire NBA team to play in one of their leagues that might get my curiosity to a higher level to see how they did.”

As a former starter for the Rhode Island Rams, Stanley Pomerantz, 85, of Palm Desert, Calif. would watch any and all NBA players in Europe and is enthusiastic about the prospect.

“Why wouldn’t I watch? It would be the best basketball available and I love watching basketball,” Pomerantz said. “Once it gets established the teams in Europe will be the best in the world. There are some big, strong, wonderful players over there. This could be a precursor to the NBA expanding to Europe, which would also be wonderful.

“Sure, they would have to figure out the travel, but it’s definitely the direction basketball is headed. Transportation is only getting better and faster. I think it would be great. I love the game and something like this, if it happens, will accelerate the inclusion of European franchises in the NBA.”

Overseas basketball is definitely a mixed bag. Questions of which players might go and under what conditions have to be answered, and the ways in which it is presented to American audiences need to be carefully considered.  Some fans no doubt need the NBA arenas and uniforms, while others just enjoy basketball at its highest level. How this plays out could have a direct impact on the settlement that is eventually reached.

It will be fun to watch.