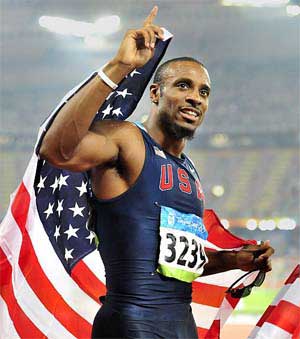 Angelo Taylor seeks to make history in 2012 Olympics in London.

Very few people are able to live their dreams. Even fewer get to do it twice. American Olympic hurdler Angelo Taylor is striving to reach the pinnacle of his sport again by becoming Olympic 400 meter hurdles champion for the third time this summer in London.

“There is no better feeling in the world than standing on top of the podium knowing that you have set a goal and reached that goal,” Taylor said. “You think about all the sacrifices you’ve made and the trials and tribulations you’ve been through. It’s pure happiness and satisfaction.”

Taylor took home Olympic gold in 2000 and 2008 in his individual event plus gold in 2008 for the 4×400 meter relay. Another gold medal Taylor won in 2000 was rescinded when one of his relay teammates failed a drug test.  Taylor shared that the IOC does not demand the physical medal be returned, the result is just wiped from the books.

Competing at the highest level in any sport requires a tremendous investment in time and effort. One wonders why an athlete with three gold medals already safely stored at home would make the sacrifices necessary to maybe win another medal.

“I’m going for legendary status,” Taylor said. “There are still goals I haven’t accomplished and world records out there that I could achieve. No one has ever won three gold medals in the 400 meter hurdles. I love sports. I love competing. People counting me out because of my age (Taylor is 33) motivates me further.

“I also want to be a role model for my twin boys. They’re seven now and old enough to understand what I do and what it takes to get where I am. I want to show them where hard work can get you and how perseverance can pay off.”

To achieve his dream, Angelo Taylor will have to succeed at the U.S. Olympic Trials later this month in Eugene, Oregon. He then will have to fight through at least two preliminary heats in London in July before he can strive for gold in the finals.

Still Taylor doesn’t see much difference in what he faces now compared to what he had to overcome to make his first Olympic team in 2000. “The competition is stiffer, but the challenge is similar,” Taylor said. “My past success doesn’t cross my mind.”

Taylor knows how fragile success can be. He made the U.S. Olympic team in 2004 but finished fourth in a preliminary heat and did not get a chance to defend his 2000 gold medal in the finals. “I was dealing with injuries, and in this sport if you’re injured you can’t compete at an optimal level,” Taylor said about the stress fractures in both shins and hip strains he was dealing with during the 2004 Games.

So far, Angelo Taylor is pleased with his 2012 season. “I’m healthy and competing well,” he said. “I’ve had two major competitions with great results.” Representing his country well is also part of Taylor’s 2012 motivation. “There’s been a lot of trash talking on the circuit about how the U.S. is going down this year,” he said, “so I’ve got to be out there to play my part.”