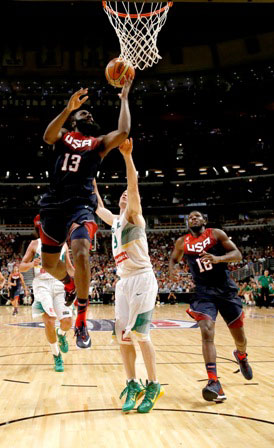 Going for the Gold: 2014 World Cup of Basketball Preview

Strengths: Team USA has an excellent array of guards led by Stephen Curry. Curry so far this exhibition season is shooting at 59 percent clip (16-27 FG’s) from the field and 60 percent (9-16 3FG’s) from three-point range. In the backcourt, Curry is joined by fellow Warrior teammate Klay Thompson, who is averaging double figures (11.0 ppg.) so far in the exhibition season. Houston Rockets guard James Harden (13.0 ppg) and Cleveland point guard Kyrie Irving give the Americans an array of scoring potential in the backcourt. New Orleans Pelicans big man Anthony Davis has become Team USA leader in both scoring and on the defensive end. Davis leads Team USA in scoring (13.8 ppg. 6.5 reb.) and is a serious force on defense end. (3.75 blk.).  Team USA had 43 steals in their first four exhibition games (10.8 stl/per game) which means they will get their hands on a lot of loose balls, which leads to easy transition baskets.

Weakness: Team USA’s frontline is seriously depleted with the losses of Paul George due to injury, as well as Kevin Durant, Kevin Love and Blake Griffin who withdrew from the roster. The loss of George hurts the most not only because he is done for the upcoming season with Indiana, but also because he would have given the Americans a scorer, a shooter and a defender from the small forward spot. Kevin Durant would have given the Americans more scoring from the small forward spot, but Durant withdrew from the team due to exhaustion. Losing Kevin Love hurts because he gives them size and rebounding. Love would have helped the Americans current +9.5 rebound margin so far through the four exhibition games. Blake Griffin would have given Team USA the explosive play from the power forward spot, especially receiving alley-oops from guards like Kyrie Irving and Stephen Curry. A lot is going to be placed on Anthony Davis and he better produce because there is not much behind him with DeMarcus Cousins and Andre Drummond having limited experience. Cousins is a banger down low, while Drummond can be a rim-protector. Remember this is international play where you can take the ball off the rim.

Outlook: Team USA will receive a stiff challenge from the international field of competitors, especially with the tournament being played in Spain, the host country’s backyard. Scoring won’t be a problem, but can the Americans challenge on the defensive end? Gone are the days where Team USA dominates a game with transition baskets, which still happens of course, but just like in the NBA, in order to win, you have to get stops on defense. Head coach Mike Krzyzewski is the perfect coach that will challenge this group to win on the defensive end and this is probably the best all-around group he’s had since he’s been Team USA’s coach. New Orleans Pelicans forward-center Anthony Davis gives them the shot blocking and defensive presence along the frontline, but the front line is limited behind Davis. Asking Davis to anchor this edition of USA Basketball is a lot to ask for a kid who just turned 21 years old recently. Guards Stephen Curry, Klay Thompson and James Harden can shoot and penetrate to the basket for easy scores but they will be challenged to defend on the perimeter. Derrick Rose will be challenged to see if he’s back after missing most of the last two NBA seasons due to knee injuries. Rose has shown so far he’s quick and explosive as he was before the injuries. With Paul George out due to a severe knee injury, the wildcard on this team could be Sacramento Kings forward Rudy Gay who gives the Americans a scorer and a shooter. Although Gay has been challenged as a defender, he could get his chance to show that he’s not just a one-dimensional player. Team USA should get through the early rounds; the real tournament begins and ends with a meeting with Spain in the Finals.

Result:  Silver Medal, loses to Spain in the Final.