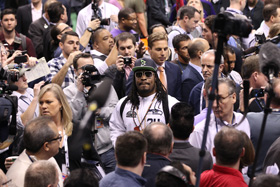 RegalMag.com would have loved to go to Super Bowl XLIX, but like Shorty Doo Wop once said sorry Martin, we just didn’t wanna go to Arizona.

That was just a little “jokey joke” from “Martin,” the greatest sitcom of all time.

Actually, we would love to be in Glendale, Ariz. but that did not stop us from enjoying all of the great things coming from media day, especially the enigma that is Marshawn Lynch.

While Lynch received all the attention with his sound bites like “I’m just here so I won’t get fined,” many other members of the Seattle Seahawks and New England Patriots had worthwhile sound bites.

“I compare him to Captain America.  I think about Aaron Rodgers, he’s like Chris Evans before he got the HGH injection in Captain America.  But before he was super smart and was still witty and stuff.  That’s how I see Tom Brady.”—Seahawks defensive end Michael Bennett on Patriots quarterback Tom Brady.

“It’s just me, going out to do a job, to save that woman.”—Patriots nose tackle Vince Wilfork who saved a woman in a car crash.

“If the Wells investigation is not able to definitively determine that our organization tampered with the air pressure of the footballs, I would expect and hope the league would apologize to our entire team.”—Patriots owner Robert Kraft on Deflate-gate

“I love my wife’s booty.  I think my wife has the best butt of all time.”—Seahawks defensive end Michael Bennett.