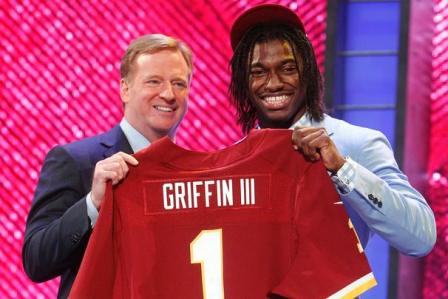 Are Stereotypes Still in Play When Choosing NFL Quarterbacks?

For the first time since the Colts and Chargers were choosing between Ryan Leaf and Peyton Manning, two quarterback prospects are the consensus number one and number two choices in the NFL draft. What is different this year is that one of the choices, Robert Griffin III, is African American.

The team choosing first, the Indianapolis Colts, jettisoned Manning to clear the path for the number one pick, which was Stanford’s Andrew Luck. Luck was interviewed for several hours at the Colts’ facility earlier this month and by all accounts was a smash hit in the interview room. The question is how much is the selection of Luck at number one and Griffin at number two related to the color of each player’s skin?

Still…wasn’t it interesting that the supposedly confidential Wonderlic test scores of Luck and Griffin were leaked. Luck, not surprisingly, knocked it out of the park with a 37 while Griffin scored a very respectable 24, which is about average for an NFL quarterback prospect. Still, given the NFL’s history when it comes to Black quarterbacks and Black head coaches, one has to wonder if those scores would have been leaked had they been reversed.

While Newton’s physical skills were universally lauded, softer skills like leadership and reading defenses have been called into question. Michael Vick’s speed and elusiveness are commended, as were McNabb’s, but it’s always pointed out that neither has won a Super Bowl and sometimes their ability to deliver under pressure is questioned.

Perhaps the most blatant evidence of racial stereotyping is in the raw numbers. At the end of the 2011 NFL season more than 70 percent of the players in the league were African American. There were 97 quarterbacks listed on an NFL roster at the end of the season, and only 20 of them were Black. Of the 32 starting quarterbacks in the league, only four of them were Black.

Is it any wonder then that hackles are raised when Wonderlic scores are leaked, when words like athletic and elusive are used instead of leadership and intelligence when evaluating African American quarterback prospects, and when the Heisman Trophy runner up is selected first and the Heisman Trophy winner is relegated to the back of the metaphorical bus?

It will be interesting to see if history repeats itself in this draft and if it does, which of Luck or Griffin becomes Manning and which becomes Leaf. And who in the NFL responsible for evaluating quarterback prospects might have to eat crow.