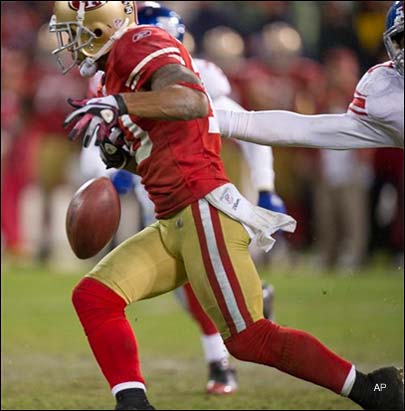 Sports fanatics are out of line for death threats after key fumbles by Kyle Williams of the 49ers.

We can be Better Fans

Without sports fanatics there would not be big time college and professional sports. The NFL is a $12 billion dollar industry, Major League Baseball earns more than $7 billion each year and the NBA does about $4 billion. This does not even count what is spent on illegal gambling, fantasy leagues, and sports outside the big three like the NCAA, NASCAR and the NHL.

Sports fanatics have occasionally stepped over the line throughout the 20th Century. A Brooklyn Dodger fan attacked an umpire after a game during the 1930s; hockey fans in Montreal rioted over the suspension of star Canadiens player Maurice Richard in 1957; and there were several incidents of looting and property damage following championships in a variety of cities after college and professional championships.

This season’s NFL playoffs seemed to have created a series of new lows in terms of fan behavior. Games involving the Houston Texans and San Francisco 49ers turned on key fumbles by the Texans’ Jacoby Jones and San Francisco’s Kyle Williams. Jones’s agent felt the need to have his client trailed on the ride home from the airport after several public threats on the wide receiver’s well being. Williams has been the subject of multiple death threats after his fumble in overtime set up the game winning field goal for the Giants, giving New York a trip to the Super Bowl.

I suppose, in light of the above, that Ravens fans are to be congratulated for apparently letting kicker Billy Cundiff live in peace despite missing a chip shot field goal that would have sent last week’s game at New England into overtime.

Also in San Francisco, one week earlier, hundreds of Saints fans were threatened and intimidated during the 49ers thrilling comeback win. The fallout was bad enough that 49ers owner Jed York ran full page ads in several newspapers pledging a no tolerance policy to those who made visiting fans uncomfortable and were otherwise unruly. The San Francisco Chronicle reported on Jan. 24 that twice as many ejections occurred in the wake of the overtime loss to the Giants. Officials say the increase was probably due to the 3:30 p.m. game time which gave fans an extra few hours to lube up before kickoff. Undercover officers dressed as Giants fans pointed out miscreants to uniformed police.

So is this what we’ve come to? Death threats to athletes who come up short when giving their all, intimidating outnumbered visiting fans, undercover police picking off the unruly, and using the tickets we buy as a license to wreak havoc as we please?

Regal thinks sports fanatics are better than that. We think fans, especially in our community, can care deeply about the outcome of a game and then let it go if and when the result doesn’t go as we would like. We think visiting fans can go to a game and not rub it in when the home team fails. This entices the majority to retaliate when the tide turns. We also think home team fans can resist the urge to bully the outnumbered supporters of the visiting team and instead strive to make their stadium comfortable for everyone with a ticket.

Mostly, though, we implore sports fanatics everywhere to hold the athletes blameless. They’re almost always doing everything they can to win. In the late 1980s, the Rams beat the Giants in an overtime playoff game in the Meadowlands. New York Quarterback Phil Simms had a rough game, and in his press conference afterwards he explained, “I have the ball a lot, and sometimes things go wrong.”

Can’t we accept that it’s usually just as simple as that?

Hirsch is a contributing writer for Regal Black Men’s Magazine, a publication dedicated to the African American community