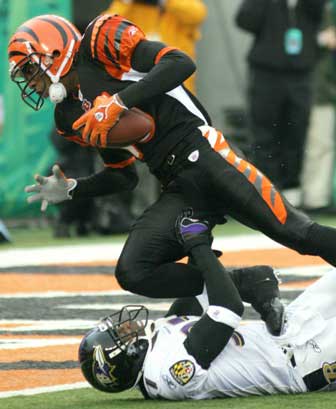 Two years ago Chris Henry was the poster boy for bad personal conduct in the NFL. A series of arrests led the Cincinnati Bengals to let him go in 2007. A few months later, over the objections of head coach Marvin Lewis, Bengals owner Mike Brown re-signed Henry to a two-year contract, insisting that Henry would turn his life around.

Chris Henry had stayed out of trouble since then, heeding warnings from Lewis that his next misstep would be his last as a member of the Bengals. He settled down with his fiancée Loleini Tonga and their three children with a wedding planned for next March. All that was snuffed out in the early morning hours of December 17 when Henry died of injuries suffered eighteen hours before when he fell off the back of a pickup truck on a curvy residential street about eight miles northwest of downtown Charlotte.

Lost was a man who was well on his way to becoming a role model for African American youth. His troubled past seemed to be behind him, and despite a broken arm that ended this season for him on November 8, he appeared to be an integral part of the Bengals’ future.

“We knew him in a different way than his public persona,” Brown told the Associated Press. “He had worked through the troubles in his life and had finally seemingly reached the point where everything was going to blossom. And he was going to have the future we all wanted for him. It’s painful to us. We feel it in our hearts, and we will miss him.”

Lewis’ opinion of Chris Henry had shifted 180 degrees over the past two years, and was grief stricken when he heard of Henry’s death. “It’s a very difficult thing with his loss and a young life and one that won’t ever get to reach its full potential.”

Henry’s troubles had included arrests for driving under the influence, assault, marijuana possession, and criminal damages. He served a league-mandated four-game personal-conduct suspension at the start of the 2008 season. His record had been clean since the suspension, and his teammates spoke fondly of him.

“Chris was a guy that I believe and our team believes was heavily misunderstood,” said quarterback Carson Palmer. “There was a lot of speculation about who he was, but the only guys that knew Chris and knew how good of a heart he had, how kind he was, how gentle he was, how soft of a heart he had, were the guys in our locker room, the guys who were close to him.”

San Francisco 49ers linebacker Ahmad Brooks played with Chris Henry through the 2007 season and spoke highly of him. “He was a good guy,” Brooks told the San Francisco Chronicle. “We’ve all made bad decisions in our life, but he grew from it, learned from it and he had a family, so I’m definitely sad to hear that happened. I knew him very well. I’ll pray for him.”

News outlets credited Tonga as a major influence in Henry’s improved conduct, yet, ironically, all indications are that it was a domestic dispute with her that led to his fatal accident. Police said the domestic dispute began Wednesday at a home about a half-mile away from where Henry was found. He had jumped into the bed of the pickup as his fiancée was driving away from the residence and at some point when she was driving “came out of the back of the vehicle,” authorities said.

Chris Henry’s memory will best be served if we remember all that he overcame to become a productive player, teammate and citizen in the years leading up to his untimely death.