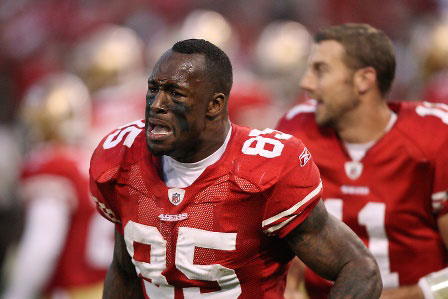 Vernon Davis gets emotional after his game-winning catch against the Saints.

The game winning catch by Vernon Davis that ended with the 49ers tight end crying in Coach Jim Harbaugh’s arms last Saturday was the culmination of six years of maturation and leadership that has his San Francisco 49ers one game away from their first Super Bowl appearance since 1995.

San Francisco began its final drive 85 yards from paydirt with just 97 seconds remaining in regulation. The favored Saints had just gone ahead 32-29 after an 88 yard drive of their own which culminated in a 62 yard touchdown pass from Drew Brees to his own tight end, Jimmy Graham.

On the final drive, Smith connected with Davis on two big plays.  A 40 yard gain put the 49ers in position to tie the game with a field goal, and a 14 yard scoring pass with nine seconds to go won it.

The Vernon Davis touchdown catch was reminiscent of Terrell Owens’s playoff-game-winning catch in 1999 against the Giants which capped a comeback from 16 points down in the fourth quarter and also stirred memories of the Joe Montana-Dwight Clark play that beat Dallas in the 1981 NFC Championship Game and kick started a 20 year dynasty that featured five Super Bowl championships.

The Montana-Clark play has been dubbed “The Catch,” while Vernon Davis refers to his play last week as “The Grab.”

“History was going through my mind,” said Davis, who finished Saturday’s game with seven receptions for 180 yards and two touchdowns. “Us against ‘No.’ Us against ‘Can’t.’ It was a very emotional game.”

Vernon Davis came off the field in tears and was greeted on the sidelines with a bear hug from Harbaugh. This was quite a contrast from three years ago when he was banished from the field by then Head Coach Mike Singletary for boneheaded play and a lackadaisical attitude.

That incident took place in October 2008 in Singletary’s first game as 49ers head coach in a 31-13 loss to the Seattle Seahawks. Vernon Davis, who was the 49ers first round draft pick and third overall in 2006, was seen as a talented player who did not work hard enough and was not a good teammate. The banishment by Singletary seemed to wake him up.

A year later, Vernon Davis was awarded the Len Eshmont Award by his teammates as the 49ers’ most inspirational and courageous player.  Singletary had demanded that Davis grow up, and the player responded. “He was always getting on me for everything,” Davis said in 2009. “But I think Singletary is always right. That’s why I trust him. I’m just grateful that I have somebody around to push me.”

And although Singletary was fired after 15 games in 2010, the contribution he made towards Davis’s maturity continues to pay off.

“Along the way there has been a lot of doubt,” Davis has said. But now, with Harbaugh’s leadership, the resurrection of quarterback Alex Smith, a matured Pro Bowl veteran in Davis and one of the stingiest defenses in the NFL, the doubt is gone.

San Francisco will host the NFC Championship Game Sunday against a team it has already beaten this season. And if the 49ers can again top the Giants they will take on the winner of the Baltimore-New England AFC title game in the Super Bowl.

Another big game from Vernon Davis can put him and his teammates on the plane to Indianapolis for the Feb. 5 tilt that is annually the biggest sporting event in America.

An appearance in that game would complete the Vernon Davis transformation.