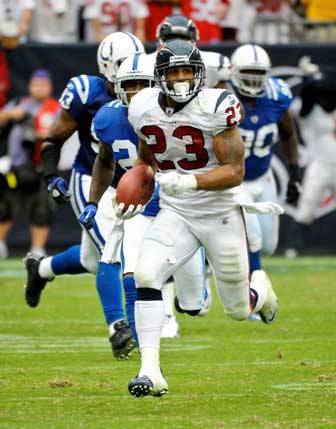 Sometimes mother does not know best.

Following Arian Foster’s junior season at Tennessee his mother, Bernadette Sizemore, encouraged her son to return to Tennessee for his senior year despite gaining 1,193 yards, scoring 12 touchdowns, and receiving indications that he would be a second round pick in the 2008 NFL draft.

Ultimately, Foster returned for his senior year. However, because of knee and thigh injuries he gained just 570 yards. He also developed a reputation for fumbling at the worst possible time.

It started with the Outback Bowl at the end of his junior season in which Foster fumbled the football at the Penn State 12 with 10:01 left and the score tied at 10.  The ball was recovered by cornerback Tony Davis and returned 88 yards for a touchdown. Penn State won 20-10. It was Foster’s second fumble of the afternoon.

“There were a couple of fumbles that were untimely that people want to remember,” said Phillip Fulmer, former Tennessee coach. “They forget about his full career, about how special that was. He had a couple after a couple of big runs. They were costly, but we probably wouldn’t have been there without him.”

Arian Foster had a game changing fumble that contributed to losses to UCLA and Auburn in 2008. “It was almost like, and you hate to say it, but there was this black cloud following you around and if it can happen bad to you, it happens bad to that team,” Fulmer told the Houston Chronicle. “Arian’s fumble going in (against UCLA), Arian’s fumble coming out against Auburn, I mean that doesn’t happen — this is a college football team. He’s taken 10,000 of those handoffs, counting all the practice time. It was miserable, it was miserable for everybody including the fans.”

The net result is that Foster dropped from a candidate for a second round NFL draft selection after his junior year to going undrafted after his senior year. On top of that, Arian Foster had developed a reputation amongst the media for being difficult, primarily for refusing to submit to an interview unless the reporter were willing to speak in ‘pterodactyl.’ Foster claimed it was a joke, but the damage was done.

A pulled muscle before his pre-draft NFL combine sealed Foster’s fate. After the draft he signed with the Houston Texans as a free agent but was cut in training camp. After no one claimed him, Arian Foster was signed to Houston’s practice squad.

From there, he responded well to Houston’s offensive scheme and climbed the team’s depth chart. Foster was added to the active roster on Nov. 17, 2009, scored his first touchdown on Dec. 17 and earned his first start in the team’s final game on Jan. 3.

In that game Foster torched the New England Patriots for 119 yards and two touchdowns, setting the stage for this season. On opening day against the defending AFC Champion Indianapolis Colts Arian Foster ran for 231 yards and three touchdowns on 33 carries. Only O.J. Simpson ever gained more yards in an NFL opener.

Through six games he leads the league in rushing with 635 yards on 115 carries for a 5.5 yard-per-carry average, highlighted by a 74 yard touchdown run against the Oakland Raiders. Suddenly, his college fumbles are forgotten and, with continued good health, true NFL riches and recognition await.