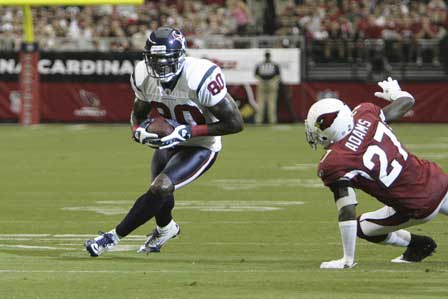 Andre Johnson (80) of the Houston Texans looks to be first receiver to gain 1,500 yards in three straight seasons (Bill Nichols/AP).

NFL wide receivers tend to have a self-centered streak. Terrell Owens has made a career out of creating a spectacle of himself, and teammate Chad Ochocinco has certainly shown the he can find the “m-e” in team. Even the sainted Hall of Famer Jerry Rice complained when Joe Montana was chosen to celebrate “going to Disneyland” after Super Bowl XXIII despite Rice’s selection as the game’s MVP.

The thinking is that to survive in a world where one is left naked to take shots over the middle and mistakes are obvious even to the fan in the last row, wide receivers must have outsized egos and personalities to remain productive and thrive.

The Houston Texans’ Andre Johnson is proving that all of that is a canard.

In three of the past four seasons Johnson has caught more than 100 passes and averaged more than 1,400 yards with 22 touchdowns in those three years. If he matches his production of the last two seasons, Johnson will be the first player in league history to have three straight seasons of 1,500 or more receiving yards. And while doing all that, he has found time to create the Andre Johnson Foundation for children and teens growing up in single parent homes.

Johnson says that he “loves reaching out to kids. It’s something that I wanted to do when I joined the NFL.

“I started it (the foundation) in my rookie year,” he continued.  “When I signed my first contract I knew I wanted to give something back to the community.  I came from a single parent home and I just wanted to support parents and kids when I can.  We all (NFL players) have to remember where we came from.  I know I do.”

Regardless of how well intentioned, a foundation such as Johnson’s is dependent upon its founder’s performance on the field and the good feeling he is able to create with fans and media. In that sense, Johnson has scored a touchdown on every play.

Richard Justice of the Houston Chronicle made his feelings clear when Johnson received his $38 million guaranteed contract, making him the highest paid wide receiver in the NFL, despite having time remaining on his original deal. “Johnson is the best player the Texans have ever had. He may be the best player they ever have. Since 2006, he has averaged 90.2 receiving yards a game, tops in the NFL. His signing sends the proper message in the locker room: if you play as well as Andre Johnson, you get special treatment.”

“It’s important that Andre have one home — and that’s with the Houston Texans,” said Texans’ owner Bob McNair. “He’ll probably be our first Hall of Fame player. We wanted to make sure he went in as a Texan and he played his career as a Texan.”

“It’s a great thing for this organization, for a great person and a hell of a player,” Head Coach Gary Kubiak said. “Andre’s what this game’s all about. For him to stay the course with this organization through some tough, tough times says a lot about what Houston means to him and what this franchise means to him. For the last two years, nobody has played at his level.”

The contract also guarantees that Andre Johnson will play the most productive years of his career in the relative obscurity of Houston’s NFL franchise. The Texans have yet to field a championship contender, and Houston is far from the east and west coast media hubs. What this ultimately means is that players like Owens and Ochocinco may continue to get extended time on ESPN, while Andre Johnson continues to deliver excellence under the radar of the national media.