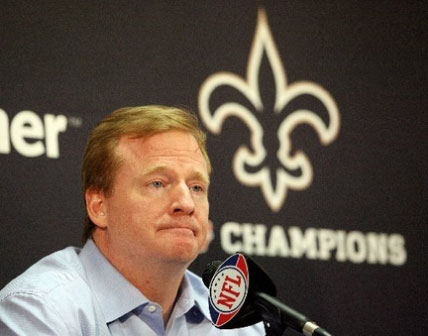 The past couple of years have thoroughly tested many NFL fans’ faith in NFL commissioner Roger Goodell and his decision making as a leader.

From the events of the past three seasons, many NFL fans are wondering, should Goodell even be the “Commish?”

Goodell has ruffled the feathers of a plethora of players in the past couple of seasons with his decision making.

He has butted heads with numerous NFL stars including Jonathan Vilma, Drew Brees and James Harrison, not to mention the ridiculously long list of defensive players he has engaged in media driven banter over the last couple of seasons.

“I don’t think he really has the player’s best interest in mind, he just wants to make (himself) look good,” said fan Nicholas Rider.

The NFL commissioner’s questionable decision making and the motives that drove those decisions have caused many fans to turn their backs on Goodell.

“Why would he allow that referee situation to get out of hand like that?” said Packers fan Jeremiah Posey. “That play [from the controversial Packers-Seahawks game] should have never happened. If our season goes south I blame no one but Goodell.”

Fans of teams such as the Green Bay Packers, New Orleans Saints, and Pittsburgh Steelers have especially taken a dislike to the NFL commissioner.

Lifetime Saints fan Anthony Bentley, Jr. has a lot to be said on the issue of the NFL commissioner’s decision making.

“The word bounty came from the media over hyping the situation. You offer players incentives, I guarantee results. If the Saints did offer their defensive players incentives to play at an above average level, we should reconsider chastising coaches and players because we as humans practice this method everyday at work, schools, and even in our homes.

“NFL commissioner Goodell didn’t handle that situation properly. He should have just fined the franchise and all involved,” said Bentley. “Goodell is a horrible businessman in my eye; he is only out for the money.”

There are a select few who feel that the NFL commissioner has done a good or acceptable job.

“You can’t really complain about Goodell.  He has made the game safer, and most of all we still have football,” said Ravens fan Robert Collier. “Goodell has done a lot for this league in the past couple of years. He is the sole reason, along with a couple of executives, for this league even still being intact. We should have more respect for the NFL commissioner.”

Though opinions vary on Goodell’s performance, many fans do not have a strong opposition to everything going on in the NFL.

As long as they have football they will be happy. It seems as though another couple of “incidents” will have to transpire before Goodell’s performance really comes under fire.

Johnson is a contributing writer for Regal Magazine, a publication dedicated to the African American community