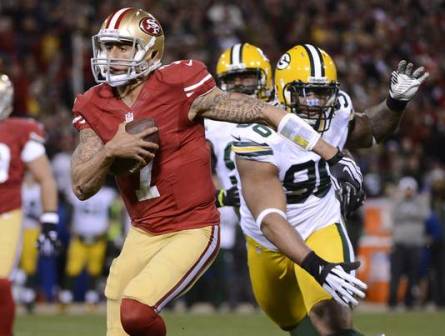 To Run or Not to Run

Running quarterbacks are changing the game of football throughout the NFL.

Over the past few seasons, we have watched more and more teams and quarterbacks run a spread offense. Is this the beginning of a new era?

It used to be that running quarterbacks were the thing for high school and college teams. Never a professional football team; at least for a team that expected to win championships.

Running quarterbacks didn’t belong in the NFL. That was until running quarterbacks like Cam Newton and Robert Griffin III came into the game, which has people believing in using this type of offense more on the professional level.

However, not everyone is sold on this type of offense.

“In this day in age, I’m still sold on the pocket quarterback,” said 24-year-old Chijioke Anyanwu. “Yeah, the (running) quarterbacks have had some success this year, but only one is still left in the playoffs.”

A spread offense is a type of offense that is used to simply stretch out the defense. Usually, three or more wide receivers are used to help with this and also run routes to stretch defenders down the field, which opens holes for the running back or quarterback. Or in Newton’s case, the running quarterback.

Quarterbacks today are not only being judged by their throwing arm, but also how fast they can run.

Being able to both throw accurately and precisely while also being able to run gives any quarterback a huge advantage.

Colin Kaepernick is the prime example of having both options as he helped lead San Francisco into the NFC’s Championship game against the Atlanta Falcons.

By running the option, he has the option of throwing deep and making those perfect throws but also running the ball and keeping defenses on its toes.

“It’s a lot better for the quarterback because he has lots of room to scope down the field,” said 18-year-old Wesley Douglas. “If he gets in trouble by a pass rusher, he has more than enough room to use his natural abilities. This provides more options for the quarterback.”

Running a spread offense was one of the keys to the early success of running quarterbacks like Newton and Kaepernick.

However, not every team is willing to have their quarterback step away from being a pocket passer to a running quarterback, especially with the added risk factors.

A quarterback is usually the leader and arguably the most important person on the team’s roster.

Defenses are always eager to get their hands on the quarterback, but the risk of getting injured during a play gets much higher when he gets out of the pocket and starts running the ball.

Pocket passers have always been the way that most quarterbacks have succeeded in the league.

Having a quarterback stay in the pocket while the offensive line protects him allows enough time to find an open receiver and be able to pass the ball and make those perfect passes.

“In my opinion the pocket passer is the all around better quarterback for durability reasons and because they often require a greater understanding of defensive schemes to make up for their lack of mobility,” said 21-year-old Brandon Victor.  “Just look at some of the best quarterbacks to play the game, Joe Montana and Dan Marino. Both were pocket passers. Even more recently, quarterbacks like Peyton Manning continue to thrive by being able to stay in the pocket and make those perfect throws.”

“Right now I have to say pocket quarterbacks still have it. However, I have a feeling the spread offense is on the way to take over,” said Anyanwu.

Whether or not a running quarterback will ever be considered one of the NFL’s top quarterbacks like Manning, Tom Brady, Aaron Rodgers or Drew Brees is something that we’ll have to wait around and see.