One Last Hurrah for Vince Young? 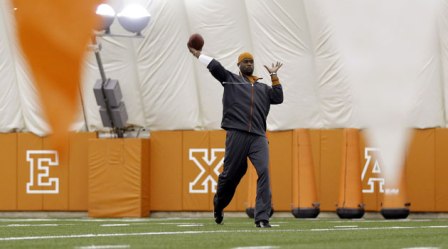 Vince Young recently participated in the University of Texas pro day to prove he still has what it takes to succeed in the NFL (Photo courtesy of cbssports.com).

On His Last Leg?

From the height of fame to hitting rock bottom was the unexpected journey of quarterback Vince Young.

When he first entered the NFL his career got off to an exceptional start showing great promise for a future in the league. Seven years after his debut in the league, Young is now out of the NFL, broke and someone many teams wouldn’t even consider working with.

Not ready to hang up his cleats and prepared to reclaim his spot in the league, Vince Young is working to gain a second chance in the NFL.  A second chance that some fans believe is warranted.

“I do believe Vince Young deserves a second chance in the NFL but what he does with the second chance is up to him,” said 23-year-old Krystle Rich. “I believe he has the potential, at this time in his career, to be an OK to good quarterback at best.”

Now in a time where the spread offense is showing great promise, it looks to be an ideal situation for Young to re-enter the NFL.

“I think with the increasing success of the running quarterback, the window of opportunity for guys like Vince Young has presented itself again,” said 23-year-old Randall Newsome. “He went from being a rare case to possibly a hot commodity in a matter of a few years.”

But not everyone is convinced that he will come into the league and dominate with the spread offense that has been so good to him in the past.

“Spread offense or no spread offense, I think he will be rusty. However, we are talking about the Offensive Rookie of the Year back in his day,” said Rich. “He has the talent and experience, but he will have to train 10 times harder than the younger talent.”

Vince Young has had a rough journey trying to make his way back into the NFL after the issues he has had to deal with.

However, athletes like Ben Roethlisberger have experienced legal troubles, being accused of rape, and those troubles ultimately did not affect his career. It poses the question as to whether or not people believe that racism played a role in his ostracism.

“I do not think racism plays into the way he is being portrayed. Being a Black man, however, does not help his situation,” said Rich. “I do believe that people may be more forgiving if he wasn’t Black, but that isn’t the root of the problem. Teams are afraid to take a chance on Vince Young because of the way he conducted himself in the past.”

“I think his lack of maturity ultimately exiled him from the NFL and made him a liability that teams didn’t want to deal with,” said Newsome. “After his episode in Tennessee, he was perceived as a head case.”

Young has been campaigning for another shot in the league promising that he has learned his lesson and will not make the same mistakes. If given the right opportunity with the right team, many are hoping he can make a comeback.

“I think he would be successful with a team that is willing to adapt the way the 49ers did for Kaepernick and the way the Seahawks did for Russell Wilson,” said Newsome. “He’s really one of the originators of this new offense so he should do well.”

At the height of his career, Vince Young was an exciting quarterback to watch. Although he has fallen on hard times, he is working to prove himself worthy of that second chance that many fans are anxiously waiting to see.