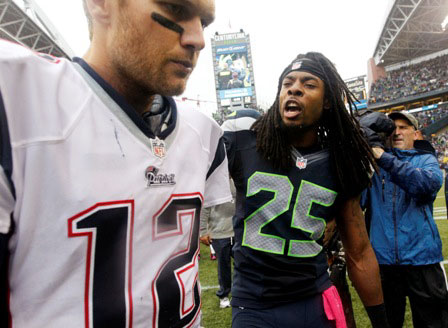 Richard Sherman (25) hopes to be a pain in the behind again for opposing quarterbacks (Photo Credit: AP Photo/Elaine Thompson).

Strengths:  Quarterback Russell Wilson (257 comp/407 att, 3,357 yards, 9 TD’s, 539 rush yards) continues to gain more confidence entering his third season as the starter. Running back Marshawn Lynch (301 att, 1,257 yards, 12 TD’s) continues to be a beast in the running game leading a Seahawks rushing attack (136.8 yards/per game) that was ranked 4th in the NFL last season. TE Zach Miller (33 rec., 387 yards, 5 TD’s) gives the Seahawks and Wilson favorable matchups. Wide receiver Percy Harvin being healthy for the entire season as a receiver and kickoff returner will be a new wrinkle in the offense for Seattle after Sidney Rice retired. Receivers Doug Baldwin (50 rec., 778 yards, 5 TD’s) and Jermaine Kearse (22 rec., 346 yards, 4 TD’s) will battle to see who will lineup opposite of Harvin. Place kicker Steven Hauschka finished fourth among kickers in scoring (143 points).

Weakness:  As great as the Seahawks were on defense (273.6 yards/per game, 1st), everyone around the league has taken notice and will try to copy Seattle’s success. Even though they have lost more pieces than they have added on defense, the addition of Phillip Adams at cornerback gives Seattle more depth. They have a set of young ball hawking linebackers in Bobby Wagner and K.J. Wright and were able to retain defensive lineman Michael Bennett and Tony McDaniel.  The only suspense that remains is who will backup Marshawn Lynch between Christine Michael (18 car, 79 yards) and Robert Turbin (77 car, 264 yards).

Outlook:  Seattle has one of the toughest schedules in the league (.561 winning percentage) and will face Green Bay, San Diego, Denver and Washington in the first four games. Getting Percy Harvin back full-time will really help Seattle experience the fullness of their offense. Look for Doug Baldwin to emerge as Seattle’s No. 2 receiver. Seattle’s defense will only get better with the return of players such as Richard Sherman, Kam Chancellor and Bobby Wagner. Part of what helped the Seahawks last season also was turnovers. Seattle had 39 takeaways, which ranked 1st in the league. The only thing that can slow Seattle down in a very competitive division is injuries; that’s the only thing.

Strengths:  Arizona has some weapons on offense. The Cardinals are led by wide receiver Larry Fitzgerald (82 rec, 954 yards, 10 TD’s) and Michael Floyd (65 rec, 1,041 yards, 5 TD’s). Arians was able to squeeze more out of quarterback Carson Palmer than he anticipated. Palmer had another solid season (362 comp/572 att, 4,274 yards, 24 TD’s, 22 INT’s) and became the first quarterback to pass for over 4,000 yards in a season with three different teams (Bengals, Raiders and Cardinals). Tight end John Carlson (32 rec, 344 yards, TD) was a big pickup for Arizona coming over from Minnesota as a free agent. Carlson gives Palmer another option in the passing game. Arizona is also going with Andre Ellington (118 car, 652 yards, 3 TD’s) exclusively at running back.  Ellington can also be effective as a pass catcher out of the backfield and gives the Cardinals ground attack a positive impact averaging 5.5 yards per carry so far.

Weakness:  The Cardinals defense took a major hit when defensive end Darnell Dockett was lost for the season after tearing the anterior cruciate ligament in his knee. Dockett was the leader on defense for Arizona with 40½ sacks and seven career interceptions. Expect the secondary led by Patrick Peterson, Jerraud Campbell and Antonio Cromartie to be the rock of the Cardinals defense this season. Arizona was among the leaders in the NFL in rushing defense (84.4 yards/per game, 1st), total defense (317.4 yards/per game, 6th) and takeaways (30, tied for 6th). Place kicker Jay Feely is in a battle for his job. He made 82 percent of his field goals beyond 40 yards and had 83.3 percent accuracy rate, which ranked 22nd in the league last season. Feely is getting a strong challenge from rookie Chandler Catanzaro.

Outlook: Arizona is a team to contend with, especially in the NFC. The question is can they keep Carson Palmer upright for an entire season and can he cut down on his interceptions (22 last season)? The Cardinals have a running game that should improve from 23rd in the league last season (96.3 yards/per game). Dockett will be a loss for the Cardinals but they have more than enough to make up for with Calais Campbell and Darryl Washington on the defensive side. Michael Floyd showed signs of being a No.2 wide receiver opposite of Fitzgerald going over 1,000 yards receiving last season. In their own division, Arizona will face their biggest challengers with Seattle and San Francisco, but the gap between them and their fellow NFC West competitors is closing and closing pretty fast.

Weakness:  After 40 plus years playing in Candlestick Park, San Francisco will be playing in a new stadium in Santa Clara, Calif. So far it’s been an adjustment period; they have had to replace the turf on the field twice already before the season starts. Even place kicker Phil Dawson, who was the sixth highest scoring kicker in the league last season, is having his issues so far in the preseason. Injuries to Navarro Bowman and the looming suspension to Aldon Smith also pose a challenge to the elite defense of San Francisco. Also, offensive lineman Alex Boone remains a holdout and San Francisco is thin on the offensive line right now.

Outlook: San Francisco has played in the last three NFC Championship games. Their defense is among the NFL’s elite and they have a multi-dimensional quarterback in Kaepernick, however, right now, the offensive line is their main issue. With lineman Alex Boone still a holdout, Kaepernick will be asked to do more than he has to, and if their offense is not in sink, they could be in some trouble, especially playing the likes of Seattle, Arizona and St. Louis in their own division. The defense is stout no question, but San Francisco has the fourth toughest schedule in the league and will face the likes of Dallas, Chicago, Arizona and Philadelphia in the first month of the season. The key is going to be Kaepernick and keeping him upright for most of the season. If the rest of the offense continues to produce and they get Navarro Bowman back before the season ends, San Francisco will be there at the end.

Strengths:  Defensively, St. Louis has one of the best front sevens in the league starting with linebackers Alec Ogletree (117 tackles) and James Laurinaitis (116 tackles, 3½ sacks) and defensive ends such as Robert Quinn and Chris Long (8½ sacks), and defensive tackles Michael Brockers (5½ sacks) and Kendall Langford. And perhaps they have just gotten even better with the addition of defensive tackle Aaron Donald and defensive end Michael Sam. The Rams may have found their workhorse running back in Zac Stacy (250 car., 973 yards, 7 TD’s), who finished with over 250 carries and nearly 1,000 yards in his rookie season. St. Louis has so many receivers that they can go three deep led by 2013 draft picks Tavon Austin (40 rec., 418 yards, 4 TD’s) and Stedman Bailey (17 rec., 226 yards), in addition to Kenny Britt (11 rec., 96 yards) coming over from the Tennessee Titans. Also they have Jared Cook (51 rec., 671 yards, 5 TD’s) at tight end who led the team in receptions last season.

Weakness:  Unfortunately, for the second consecutive year, the Rams have to deal with the loss of their quarterback Sam Bradford (159 comp/262 att, 1,687 yards, 14 TD’s, 4 INT’s). Bradford who was the No. 1 overall pick back 2010, will miss the regular season after suffering an injury to the anterior cruciate ligament in his knee, the same knee that caused him to missed multiple games last season as well. Shaun Hill is the next man up for St. Louis, as the Rams right now don’t plan to bring in a veteran. The Rams averaged 195.3 yards passing per game, which was 27th in the league and averaged only 304.8 yards on total offense, which ranked 30th out of 32 teams in the league.  In developing a running game with Zac Stacy, St. Louis is looking for depth with either Benny Cunningham or newly drafted Tre’ Mason out of Auburn.

Outlook: The Rams future is bright, but for now it will not include Sam Bradford. For the second consecutive season, Bradford will miss time due to an injury to his knee. St. Louis has a schedule with a .562 winning percentage, third best in the NFL. Defensively, St. Louis can play with the best in the league, however offensively they will be challenged to stay with the elite teams in the NFC. Quarterback Shaun Hill has shown that he can have success in the short term, but Hill might be counted on for a 16 game season. The good news is the Rams have some talent around him so Hill won’t have to win games by himself. After winning seven games in back to back seasons, the Rams are competitive, but could coach Jeff Fisher be on the hot seat?