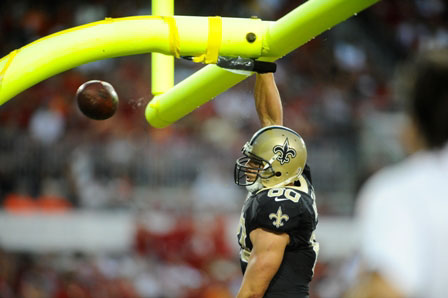 Strengths: Quarterback Drew Brees continues to give New Orleans stability and consistency passing for over 5,000 yards for the fifth time in his career. Tight End Jimmy Graham has emerged as a presence with 36 touchdowns over the last three seasons. New Orleans’ defensive line is led by Cameron Jordan and Junior Galette who each posted double-digit sacks last season. And with the acquisition of free safety Jarius Byrd, to go with SS Kenny Vaccaro, the Saints secondary could be one of the best in the NFC.

Weakness: New Orleans’ top three running backs last season (Pierre Thomas, Mark Ingram, and Khiry Robinson) combined for 1,159 yards. New Orleans has not had a 1,000-yard rusher since Deuce McAlister in 2006, Sean Payton’s first season with New Orleans. How long can the Saints continue their success with a set of running backs instead of one dominant running back? Mark Ingram will get the first crack at being the featured back and he has a lot of incentive, playing in the final year of contract.

Outlook: The defense for New Orleans made a dramatic improvement finishing in the top five in the league in both against the run and against the pass. The running game has to win some games for New Orleans this season. In their 11 wins last season, the Saints only had one 100-yard rushing game (Mark Ingram vs. Dallas 145 yards, Nov. 10). Every year since the inception of the NFC South in 2002, there has been a different division winner each year, and there should be no exception this year.

Strengths: Quarterback Matt Ryan continues his steady rise to an elite quarterback in the NFL. Ryan posted his third straight season of 4,000 yards or more passing (439-651 att/comp, 4,515 yards, 26 TD’s, 17 INT’s). Wide receivers Roddy White (63 rec, 711 yards, 3 TD’s), Julio Jones (41 rec, 580 yards 2 TD’s) and Harry Douglas (85 rec, 1,067 yards, 2 TD’s) give Ryan a list of options. White and Jones are one of the best 1-2 receiver combos in the NFL and both missed significant time last season due to injuries. Atlanta has added a potential weapon in kick returner Devin Hester, free agent from the Chicago Bears, who can break away for a score as he has 13 career return touchdowns.

Weakness: Once a strength of the Falcons previously now is a weakness and that’s the running game. Steven Jackson was brought in from St. Louis to give Atlanta the spark in the running game they needed. However, just as it has been for most of his career, Jackson missed time last season due to hamstring and leg injuries which led to only 543 yards rushing and six touchdowns, which still led the team in both categories. The anchor of Atlanta’s offensive line Sam Baker is done for the season with a torn patella tendon. Right tackle Jake Matthews, part of the Matthews family tree of NFL players, could be switched to protect Ryan’s blind side at left tackle.

Outlook: If all the important parts are healthy for the entire season, the Falcons will contend not only for the division but also for the NFC. Missing wide receivers Roddy White and Julio Jones for a large part of the season last year really hurt Atlanta. And the running game, which was a staple of the Falcons success for many years, had a total of 1,241 yards between seven running backs that played last season. Seven of Atlanta’s 12 losses last season were by seven points or less, so they will be competitive and if they can stay healthy, they can make the NFC South the most competitive division in football.

Strengths: Quarterback Cam Newton (292-473 att/comp, 3,379 yards, 24 TD’s 13 INT’s) began to show signs of becoming an elite NFL quarterback finishing 2013 with an 88.8 quarterback rating. Although he is recovering from ankle surgery, Newton still gives you the dual threat as a runner as well (111 att, 585 yards, 6 TD’s). Tight end Greg Olsen had another solid season finishing with 73 receptions (816 yards, 6 TD’s). The dual running back threat of DeAngelo Williams (201 att, 843 yards, 3 TD’s) and Jonathan Stewart (48 att, 180 yards) gives Carolina the potent offense which helped them win 11 out of their final 12 games last after starting the season 1-3.

Weakness: The Panthers lost their top four wide receivers in free agency, including their all-time leading receiver Steve Smith, who signed with the Baltimore Ravens. They did address the issue by drafting Florida State’s Kelvin Benjamin and he’s going to be counted on to produce like a No. 1 receiver. Carolina added veteran receivers like Jason Avant (38 rec, 447 yards, 2 TD’s), Jerricho Cotchery (46 rec, 602 yards, 10 TD’s) and Tiquan Underwood (24 rec, 440 yards, 4 TD’s). Losing offensive lineman Jordan Gross is going to be tough to manage for Carolina. Gross played 11 seasons with the Panthers and played and started in all 167 games.

Outlook: Unfortunately for the Panthers here’s the downside of winning your division, you get a first place schedule. And for Carolina that’s playing the likes of Baltimore, Cincinnati and Green Bay on the road, and host Pittsburgh and Chicago, and that’s in the first seven games of the season. The loss of wide receiver Steve Smith is huge, and if Kelvin Benjamin is expected to fill those shoes, he’s going to have to be totally in sync with Newton. Carolina’s defense is solid, ranking second in the league in total yards per game (301.3 ypg.) and in points per game (15.1 ppg.). But if too much is placed on Newton to do everything, that could be bad news for Carolina.

Weakness:  Coach Lovie Smith was one of the originators of the Tampa Two defense when he was a defensive coordinator for the Rams. He will be looking to bring that back to the Bucs this time around. Smith does have some hard-hitters such as Dashown  Goldston at free safety and Mark Barron at strong safety. Tampa Bay will be looking for their leader at quarterback. Mike Glennon finished the 2013 season solid and with some strong numbers, however Smith will be looking to bring in his own quarterback and he’s going to rely on Josh McCown for now to do that. McCown posted some good numbers in Chicago last season filling in for Jay Cutler for a few games last season.

Outlook: As bad as things were in Tampa last season, the Buccaneers were not that far away from being a competitive team. Four of their 12 losses last year were last-second losses including an overtime 27-24 loss at Super Bowl champion Seattle. Defensively, Tampa Bay was in the middle of the pack in the league in total yards (5,568), passing defense (237.9 yards) and points allowed (24.3) and the Bucs were a +10 in the turnover ratio.  Lovie Smith is a proven winner shown by his 81 wins in nine seasons with the Bears. The Buccaneers will make the NFC South one of the most competitive divisions in the NFL this season. When will it be Tampa Bay’s turn to win the NFC South; it maybe next year?