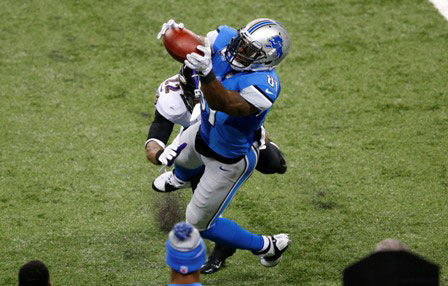 Once again the offense of the Lions is potent led by wide receiver Calvin Johnson (Photo Credit: AP Photo/Paul Sancya).

Strengths: Quarterback Aaron Rodgers has emerged and become one of the NFL’s elite quarterbacks. Rodgers did miss some time with a shoulder injury, but returned late in the season to give Green Bay a division title once again. Running back Eddie Lacy has taken over the starting running back duties and had a great season rushing for over 1,100 yards while also developing his blocking skills in pass protection. Rodgers’ main targets are wide receivers Jordy Nelson and Randall Cobb. Cobb is emerging in a Packers offense that ranked third in the league in total offense averaging 400 yards per game.

Weakness: The defense has to come to play for the Pack. Green Bay was in the bottom of the league in points allowed (26.8, 25th), total defense (372.5, 25th), rushing defense (125 yards per game, 25th) and passing defense (247.2 yards per game, 24th) while only being a -3 in the turnover ratio. Help should come in the form of defensive end Julius Peppers, rookie free safety Ha-Ha Clinton-Dix and outside linebackers Carl Bradford and Khyri Thornton. Safety Micah Hyde should give Green Bay a spark in the return game averaging 24.1 yards on kickoff returns and 12.3 yards on punt returns.

Outlook: Despite missing Rodgers for part of the season with a shoulder injury, the Packers still won the division and could have gone further in the playoffs. The defense for Green Bay has playmakers in linebackers A.J. Hawk and Clay Matthews, however they have to improve on points allowed giving up 26.8 points per game (24th in the league). Losing nose tackle B.J Raji is huge but situational players like defensive tackles Mike Neal and Mike Daniels and linebacker Nick Perry should help.  The Packers schedule is tough in the beginning with three of their first four on the road; however, they get the likes of New England, Carolina and Atlanta coming to Lambeau Field.

Strengths:  The Detroit Lions offense had no trouble scoring points (24.7 points per game, 13th). Quarterback Matthew Stafford posted his typical numbers passing for 4,650 yards and 29 touchdowns. However, after a great start a 5-2, the Lions finished losing seven of their last nine and Stafford contributed to most of that committing 23 turnovers. The Lions have a running game and it appears that Reggie Bush is healthy and could take on more of the load on offense. Wide receiver Calvin Johnson still put up stellar numbers (84 rec., 1,492 yards, 12 TD’s) despite missing two games due to various injuries. The addition of Golden Tate and offensive coordinator Joe Lombardi using more two back formations will help ease some of the double and triple teams Johnson faces on a regular basis.

Weakness:  Tight end; It’s been a while since Detroit has had a great pass catching tight end. Draft choice Eric Ebron could be that player. In the Lions’ offense, look for Ebron to emerge as a safety valve option for Matthew Stafford. Defensive line play has the talent with Nick Fairley, Ndamukong Suh, and Ezekiel Ansah along the frontline. Suh is coming off his best season and should continue to rise among the NFC’s best pass rushers. Injuries have always hit the Lions at some point. Last season they were 5-2 before the injury bug hit, which was the reason for their slide at the end of the season and the eventual firing of Jim Schwartz.

Outlook: Detroit has the offense with playmakers like Bush and Johnson to go along with Stafford at quarterback. However, Stafford must cut down on his turnovers to give his team a chance. Wide receiver Calvin Johnson still is a playmaker and can potentially be a 2,000-yard receiver. If Golden Tate can take some double teams away from Johnson with plays of his own, Detroit has shown the promise to breakthrough, and if their defense can make a few plays, the Lions can make a roar in the North.

Strengths: Upgrading the offensive line paid dividends for quarterback Jay Cutler. Cutler had a great season, which led to him getting a new multi-year deal. Chicago had two receivers in Brandon Marshall and Alshon Jeffrey combine for 2,700 yards receiving. In addition, running back Matt Forte’ had perhaps his best season rushing with 1,339 yards and nine touchdowns on the ground. Cutler has everything he needs along with tight end Martellus Bennett to piece together his best season as a Chicago Bear. Place Kicker Robbie Gould had his most accurate season as a Bear and scored his most points since 2007.

Weakness: The defense really needs an overhaul. Injuries to linebackers Lance Briggs and D.J. Williams led to the Bears poor play giving up 394.6 yards per game total offense, 30th in the NFL, in addition to the struggles of rookies Jon Bostic and Khaseem Greene. Chicago did add former Minnesota Vikings defensive end Jared Allen to replace Julius Peppers who went to Green Bay. Hopefully, Allen still has something left in his 30’s.

Outlook: The Bears will be competitive in the North, but it will have to take another step forward on offense, and defensively they must turn it around. Green Bay is the class of the division, but the Bears are coming on fast, especially if Trestman continues to input more offensive continuity with Cutler. The December games against Dallas, New Orleans and Minnesota are big and Chicago plays its best in the cold weather on the Lakefront.

Strengths: As long as running back Adrian Peterson is healthy, Minnesota’s running game will continue to perform at an elite level. The Vikings running game averaged 130.1 yards per game, 8th in the league. Quarterback Matt Cassel should give the Vikings some steady play for now until rookie Teddy Bridgewater is ready. Bridgewater was drafted in the top of the second round to eventually become Minnesota’s long term answer at quarterback, which ranked 23rd in the league in passing averaging 214.2 yards per game. Wide receiver Cordarelle Patterson is emerging as the Vikings No. 1 receiver and should get more touches with Norv Turner as the offensive coordinator. Patterson is a deep ball threat and didn’t have more than four catches per game until after week 12 last season.

Weakness: The defense needs some leaders to emerge with the departure of defensive end Jared Allen to Chicago. Minnesota’s defense was ranked in the bottom of the league in total defense (397.4 yards per game, 31st), passing defense (287.2 yards per game, 31st) points allowed (30.0 ppg, 31st) and they were a -12 in the turnover ratio.  Minnesota through the years has relied on Peterson and the ground game to get them rolling, however, Peterson is creeping close to 30 and maybe the development of Bridgewater will extend Peterson’s years. Minnesota’s need for a No. 1 receiver will still be a concern.

Outlook: Minnesota will continue to build with Peterson, eventually with Bridgewater at quarterback, Patterson at wide receiver and Kyle Rudolph at tight end. Minnesota’s special teams last season was the highlight of their season as Patterson averaged 32.4 yards per kickoff return last season. If Minnesota is going to climb out of the cellar of the NFC North, they will need more from wide receiver Greg Jennings. Jennings did not have a great season last year and until Patterson emerges as a No.1 receiver, Jennings has to step up. Peterson is already mentioning playing for someone else, and Minnesota new stadium won’t be ready for a couple of years. However, as long as Peterson is a Viking, Minnesota will be competitive.