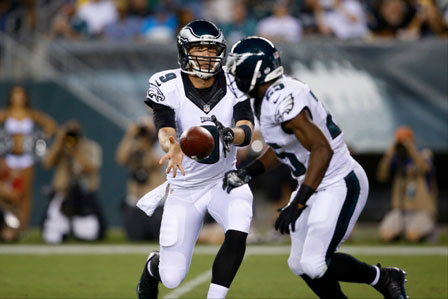 Nick Foles (9) and LeSean McCoy (25) will deliver for the Eagles, but the question mark is on defense (Photo Credit: AP Photo/Michael Perez).

Strengths:  Philadelphia added another weapon to their offense by obtaining running back Darren Sproles from New Orleans for a fifth-round pick. Sproles gives the Eagles a pass receiver coming out of the backfield, which he did very well for New Orleans finishing with 71 receptions, which was second on the team last season. With the presence of Sproles, that might take away some carries from LeSean McCoy who finished with 1,607 yards and nine touchdowns while averaging 5.1 yards per carry. Philadelphia finished No. 1 in the league in rushing (160.4 yards/per game) and No. 2 in total offense (417.3 yards/per game).  In his first year as a starter, quarterback Nick Foles had posted some incredible numbers last season (203 comp., 317 att, 2,891 yards, 27 TD’s, 2 INT’s) while posting a 119.2 quarterback rating, best in the league last season. Linebacker is a strength of the Eagles led by former Texan DeMeco Ryans. Ryans has established himself as the Eagles’ best inside linebacker and has helped the smooth transition to the 3-4 defense a good one.

Weakness: Losing wide receiver DeSean Jackson to a division rival (Washington) is already bad enough, but the Eagles will rely on Jeremy Maclin, who is recovering from a torn ACL to be the replacement as the No. 1 option. Maclin should receive a challenge from Riley Cooper as well. Cooper has not been able to separate himself from the defenders, which caused a lot of double-teams on Jackson when he was with Philadelphia.  And the special teams should be interesting with rookie kicker Cody Parkey beating out incumbent Alex Henery for place kicking duties. Henery did not have a strong leg missing many kicks from beyond 50 yards last season. As good as Philadelphia was on offense, they were that bad on defense. The Eagles gave up 394 yards per game in total defense, which was 29th in the league and pass defense giving up 289.8 yards per game through the air, which was 32nd in the league.

Outlook: With the addition of Sproles, the Eagles’ offense will be able to spread out defenses even more. Offensively, Philadelphia will be there with some of the best offenses in the league, however, can they stop anybody on defense? Losing wide receiver DeSean Jackson does hurt because it takes away the deep-ball threat in the Philadelphia offense. Hopefully, place kicker Cody Parkey has a stronger leg than Henery even though Henery made 86 percent of his field goals for his career. The defense against the run was pretty good giving up only 104.2 yards per game and finishing with a +12 turnover ratio. However they won’t win the turnover battle every year and if cornerback Brandon Boykin has another big year in the Eagles’ secondary, Philadelphia can certainly contend and win the NFC East once again.

Strengths:  Quarterback Tony Romo had another solid season finishing with 3,829 yards passing with 31 TD’s and only 10 INT’s. The mega-talented Dez Bryant and tight end Jason Whitten lead Romo’s receiving corp. The promising Terrance Williams replaces the departed Miles Austin as the No. 2 receiver and running back DeMarco Murray not only carries the ground attack for the Cowboys, but also has developed into a very good receiver. Place kicker Dan Bailey made more than 93 percent of his field goals for the second straight year including six of seven field goals from over 50 yards. Return man Dwayne Harris is coming off a season in which he amassed more than 1,100 total yards in returns.

Weakness:  While Romo continues to put up nice numbers year in and year out, he is coming off back surgery and he will be 34 years old this season. There’s a reason why the Cowboys have been cautious with Romo especially with a lot of money still yet to pay him. Dallas allowed their all-time sack leader DeMarcus Ware and defensive tackle Jason Hatcher to walk away as free agents. In addition, linebacker Sean Lee was lost for the season after suffering a knee injury during the off-season. Defensively, Dallas ranked last in the league in total defense (415 yards per game, 32nd), rushing defense (128.5 yards per game, 27th) and passing defense (286.8 yards per game, 30th). Defensive Coordinator Rod Marinelli will have his hands full trying to get the Cowboys to respectability on defense.

Outlook: There’s not much to hang your hat on with the Cowboys, especially on defense. Defensive coordinator Rod Marinelli might have a hard time just fielding a defense with so many key players being out. Defensive end George Selvie won’t have an easy route getting to the quarterback with both Ware and Hatcher not being there. Look for Dallas to make up the difference with defensive end Anthony Spencer along with free agent Henry Melton, known as a traditional run stopper.  If Romo and running back DeMarco Murray can stay healthy, that will be a positive sign. However, if injuries take place this year, the Cowboys could be right around a .500 club this year, however they won’t have to come down to a last game, late season drive vs. New York in order to make the playoffs.

Strengths: Wide receiver Victor Cruz has really blossomed as the Giants No. 1 receiver. Despite missing two games late in the season due to injuries, Cruz once again put up solid numbers falling just two yards short of another 1,000-yard season. But the lack of touchdowns is the most concerning as Cruz finished with only four scores last season. Running back is a lot more stable with the addition of Rashad Jennings coming over from the Raiders. Jennings had over 1,000 total yards last season on 199 touches performing as the featured back. He should garner more opportunities in New York with a revamped offensive line and help improve a Giants rushing attack that was near the bottom of the league in rushing yards per game (83.2 yards per game, 29th).

Weakness: Quarterback Eli Manning has to regain the form that made him an elite quarterback a couple of seasons ago. New York’s offense ranked 28th in total offense (307.5 yards per game) and Manning himself threw a league high 27 interceptions. Toiling between an injured offensive line and the chemistry with his receivers being off kilter, Manning will be working with a new offensive coordinator this year in Ben McAdoo. McAdoo wants to utilize a west coast offense with a balanced power running game and a vertical passing attack. McAdoo, who spent his last eight seasons as an assistant under Mike McCarthy with the Green Bay Packers, replaces Kevin Gilbride, who announced his retirement on Jan. 2. Gilbride had held the position since 2007.

Outlook: If Eli Manning can get back on track, New York can make the NFC East another tight division once again. New York finished 2013 with -15 turnover ratio generally because of the turnovers from Manning. If the offensive line gets in sync, Manning a good receiver corp. led by Cruz, emergence of Ruben Randle as the No. 2 and the drafting of wide receiver Odell Beckham out of LSU gives the Giants three-deep at the receiver spot. Defensively, New York was in the middle of the pack in points allowed (23.9 ppg., 15th), Total defense (332.2 yards per game, 8th), Rushing defense (108.9 yards per game, 14th) and Passing defense (223.3, 10th). The defensive line led by Jason Pierre-Paul, Johnathan Hankins, Cullen Jenkins and Mathais Kiwanuka gives the Giants the push upfront. If Eli can return to the old Eli of a few years ago, New York can make the division a serious three-team race.

Predicted finish: 8-8, Tied for 2nd in NFC West (will not make playoffs)

Strengths: Running back Alfred Morris followed up his rookie campaign of over 1,600 yards rushing with a near 1,300 yards rushing last season. However, the departure of Kyle Shanahan who featured a more run-oriented offense gives way to Jay Gruden’s more passing attack offense. The Redskins ranked fifth in the league in rushing 135.3 yards per game. Although Morris is not a great pass catcher out of the backfield, he will benefit from defenses stacking the box and he should still get carries on the goal line. Robert Griffin III should really benefit from the new passing attack Gruden will implement. Griffin III blends his big play ability into a collection of weaponry that includes wide receivers Santana Moss, Andre Roberts and Pierre Garcon and the addition of DeSean Jackson along with tight end Jordan Reed.

Weakness: Defensively, Washington has some issues with the middle of their defense. Linebacker London Fletcher has retired and they will need Perry Riley to play inspired ball to fill the need. Washington also has defensive tackle Jason Hatcher along with linebackers Akeem Jordan, Adam Hayward and Darryl Sharpton. Washington brings back veteran safety Ryan Clark to anchor a secondary led by cornerback DeAngelo Hall, who led the team in interceptions last season with seven. Place kicker Kai Forbath has not scored more than 85 points in a season and Washington needs more scoring to be competitive in the NFC East. Rookie Zach Hocker has a stronger leg and should give Forbath a run at the kicking duties this season.

Outlook: Robert Griffin III has to return to the elite passer and runner that took the league by storm in his rookie year. The Redskins have a solid ground game with Alfred Morris, however Griffin has to develop now as a passer exclusively. For Griffin, playing with or without the knee brace is still the question and if he can’t deliver Kirk Cousins is possibly the answer. On defense, Washington needs to address their front seven, which might be OK in the short term. The Redskins receivers 1-2-and 3 could be pretty good if DeSean Jackson comes to play every week, not just against the Eagles. There are too many questions right now, especially if they need to change the name of the team’s mascot. However, if RGIII returns to his rookie form, Washington can make this division very competitive.

Predicted finish: 6-10 4th in NFC West (will not make playoffs).