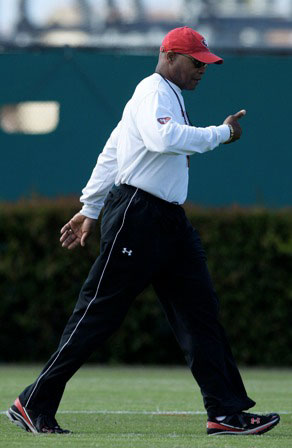 Singletary has the San Francisco 49ers poised for a playoff run in 2010 (Jeff Chiu/AP).

Hall of Fame linebacker Mike Singletary inherited quite a mess when he was appointed head coach of the San Francisco 49ers in October 2008. The team was 2-5 under Mike Nolan and seemed to be in disarray.

Former first overall draft pick Alex Smith had failed on the field and was injured and his successors at the position were a series of marginal players with limited ability, and for the most part it showed. In Singletary’s first game as head coach (a 34-13 loss to Seattle) he sent tight end Vernon Davis to the locker room for unprofessional contact with about 10 minutes remaining in the game, and at halftime of that game Singletary reportedly dropped his pants in front of the team to make a negative point regarding the way they were playing.

Despite all that (or maybe in part because of it), the 49ers rallied to go 5-4 the rest of the way and Mike Singletary received a four-year, $10 million contract to continue as head coach. The 2009 season was uneven as the 49ers started 3-1 and won their last two games but sagged in the middle to miss the playoffs with an 8-8 record. Still, under Mike Singletary’s leadership, Smith seemed to finally find himself as a quarterback as the coaching staff adopted a spread offense to better showcase his ability to throw on the run. The 49ers under Singletary are also known for intensity on every play and getting the most from their collective talents.

“The thing I really want the guys to understand is the battle,” said Mike Singletary. “When you begin to talk about being a great team, about being a championship team, there are some things you need that you can’t even explain what they are. You just know it and you just feel it.”

The 8-8 record was the 49ers best since 2002 and included a 5-1 record against NFC West foes. Singletary has helped to bring out the best of his players, no more notable than Davis who posted one of the most prolific seasons by an NFL tight end in recent years. Davis joined four of his teammates – punter Andy Lee, running back Frank Gore, defensive tackle Justin Smith and linebacker Patrick Willis – as participants in last season’s Pro Bowl.

In numerous areas, the 49ers faithful saw a marked improvement. Defensively, Mike Singletary’s team became one of the most-feared units in the NFL by season’s end, having allowed the fourth fewest points per game in the league. The unit was one of the biggest play-making squads as well, ranking tied for fifth in takeaways and fifth in turnover differential. The defense also finished the year with 44 sacks, tied for third in the league, and with the sixth ranked unit against the run.

Offensively, the 49ers encountered an up and down year. The unit endured multiple injuries and various other personnel issues throughout the season. By the time the season started to wind down, starting quarterback Alex Smith began to get hot. As he settled into his role, he allowed his weapons – Gore, Davis and wide receivers Josh Morgan and Michael Crabtree – to do the heavy lifting.

As a result of all that, plus some weaknesses in divisional foes, 2010 could be the year Mike Singletary leads the 49ers return to the playoffs for the first time since 2002.

Arizona should feel a negative affect from the retirement of quarterback Kurt Warner and the questions regarding replacement Matt Leinart’s fitness as an NFL quarterback. The Rams are coming off a season where they won just one game, and Seattle is adjusting to a new coach as Pete Carroll escaped from USC just before the NCAA put the Trojans on probation and will try to reverse the losing NFL record he built with the Jets and Patriots in the 1990s.

The schedule also works in San Francisco’s favor. Two of their toughest opponents figure to be defending Super Bowl champions New Orleans and the Philadelphia Eagles. Both those games are at home. The 49ers’ Bay Area showdown with the Oakland Raiders is also scheduled at Candlestick Park. The 49ers’ toughest road game is just 500 miles away in San Diego, and they only face the distraction of a Monday Night Football game once, in Arizona, on Nov. 29.

Coach Mike Singletary is upbeat regarding the team’s performance after a mini-camp last month. “I thought our offense got better, I thought Alex (Smith) did a great job of having a command of the offense and executing the offense fairly well. I thought the receivers did a good job. The O-line continues to progress,” he said. As for the defense, “On the defensive side of the ball, our D-line is working. Our linebackers, it was great to see Willis back in the mix. It’s a work in progress, but I think we’ll get better.”

If Mike Singletary is right and things do get better, then last year’s 8-8 record could become 10-6, or better, in 2010, which should be enough to win the NFC West and earn that long-awaited berth in the playoffs.