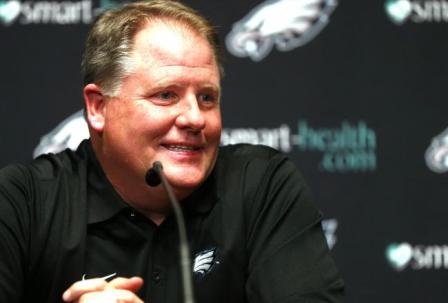 By the time training camp starts in July, Michael Vick will be a 33-year-old quarterback coming off a midseason neck injury and the failure to reclaim his starting job from Nick Foles.

He will also have to adapt to a new head coach as Chip Kelly from the University of Oregon replaces Vick’s patron saint of second chances, Andy Reid.

Vick will have to learn a new offense, one that is likely to include significant physical risk to the quarterback if the offense Kelly used at Oregon is any indication. Despite that, Vick is confident that he can reclaim his job and Kelly has declared an open competition between Foles and Vick for the job of Philadelphia Eagles quarterback.

“Overall, you have to look at what really works and what makes you comfortable. I felt as if coming back made me comfortable. Meeting with Chip for first time, I felt like as if we can make it work,” Vick told ESPN.

Eagles’ management agrees. Rather than release Vick, the team restructured his contract to what is essentially a one year deal that could be worth $10 million if Vick hits the incentives. This contract replaces a much more lucrative multi-year pact that guaranteed Vick $16 million for 2013. Clearly, the quarterback identified by Regal as having a good chance of being the next Black quarterback enshrined in Canton, is on the spot.

“I think in terms of Michael we look at everything,” Kelly said at his introductory press conference. “What I look at is skill set first and foremost. What he can do, how he can throw the football, how he can beat people with his feet.

At least one expert believes that considering Vick to be the next Philadelphia Eagles quarterback is unwise. “Michael Vick can’t stay healthy when his coach wants him to sit in the pocket,” says NFL Columnist Ian Kenyon via Twitter. “What do you think would happen in Chip Kelly’s spread option?”

ESPN estimates that the Oregon quarterbacks ran the ball nearly 60 percent of the time under Kelly. And while that number would likely decrease to some degree in the NFL, the Washington Redskins experience with injuries to Robert Griffin III has to at least give the Eagles and their fans reason to think twice about the season-long prospects with Vick as the starting quarterback.

Still, Cam Newton, Colin Kaepernick and others are proving that the spread option can work in the NFL and the quarterback might stay in one piece. Foles is much more of a pocket quarterback and probably not a good fit for Kelly’s plans. So, Kelly and Vick may need each other, at least for the 2013 season.

The Eagles pick No. 4 overall next April’s draft, and a player such as West Virginia’s Geno Smith or Florida State’s E.J. Manuel might make more sense as the long term Philadelphia Eagles quarterback. Perhaps the plan is for Vick to serve as a bridge to the team’s real quarterback of the future.  The Eagles recently signed former Oregon quarterback Dennis Dixon as well.

Vick himself, not surprisingly, doesn’t see it that way. “I’m not living in the past; I’m living in the present and the future,” he said Tuesday. “I’m motivated now to get back into top shape to come back and to be one of the elite quarterbacks in the league again.”

Vick says he can play another four to five years. Is this another case of an aging athlete fooling himself and letting his team use him while they need him, all the while planning for a future without him? Time will tell, and Regal will be watching.