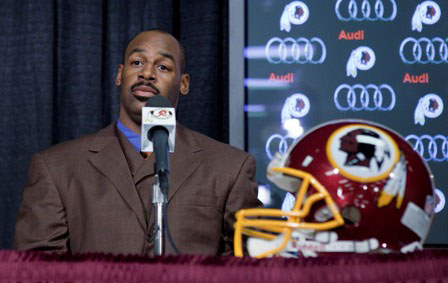 It seems these days opinions regarding events in Washington go straight down party lines, and the Donovan McNabb trade was no exception. If you live in the nation’s capitol you love it, and if you’re from Philadelphia you wonder why the Eagles would do such a thing.

According to the Philadelphia Inquirer, Pennsylvania Governor Edward Rendell said he was “less than enamored” with the trade. “I’m not convinced [new quarterback Kevin Kolb] has a strong enough arm to be very much more than somewhat effective at throwing slant passes,” said Rendell, perhaps the nation’s best-known Eagles fan. “. . . I think it says we’ve written off the next couple of seasons and are in fact rebuilding.”

“He’s going to be like some of the journeyman quarterbacks we had before McNabb,” Philadelphia bus driver Ronald Dowd said of Kolb to the Inquirer. “Guys like Bobby Hoying and Ty Detmer.”

Some noted that the trade reminded them of one from 1964, when future NFL Hall of Famer Sonny Jurgensen was traded by the Eagles to the Redskins and became a perennial Pro Bowl player in Washington. “When will these people ever learn?” Jurgensen said upon hearing of the Donovan McNabb deal.

Reaction from Redskins players to the team’s trade was overwhelmingly positive, according to Jason Reid of the Washington Post. “Obviously, it’s very surprising,” outside linebacker Lorenzo Alexander said. “You’re talking about a guy who has been to the big game [Super Bowl XXXIX ] and played in a lot of NFC championship games. He’s done it for a long period of time, so he can’t do anything but make your team better.

“I love (last year’s Redskin quarterback) Jason Campbell as a person and a player, but the front office wanted to go in a different direction.”

The Eagles received two draft choices from Washington for Donovan McNabb, a 2010 second-round pick and either a third or a fourth round pick in 2011. “We thought this was the best for Donovan and the compensation was right,” Eagles coach Andy Reid said.

“Donovan McNabb was more than a franchise quarterback for this team,” said Eagles chairman Jeffrey Lurie in a statement. “He truly embodied all of the attributes of a great quarterback and of a great person. He has been an excellent representative of this organization and the entire National Football League both on and off the field.

“I look forward to honoring him as one of the greatest Eagles of all-time and hopefully see him enshrined in the Pro Football Hall of Fame in Canton one day. I wish Donovan and his beautiful family great health and joy for many, many years to come.”

“Donovan is an accomplished quarterback who has been a proven winner in the National Football League,” new Redskins’ coach Mike Shanahan said in a statement released by the team. “I have long admired his competitiveness and feel he will be an outstanding addition to the Redskins and our community. He knows our division and the roadmap to success in the NFC East.”

History tells us that trading for a star quarterback at the end of his career can be tricky business. The images of Joe Namath with the Rams and John Unitas with the Chargers were disconcerting, and neither did much with his new team.

On the other hand, Y.A. Tittle went to the Giants from the 49ers near the end of his career and led the team to three NFL Championship Game appearances, and Kurt Warner just completed a very nice run with the Arizona Cardinals after wearing out his usefulness in St. Louis and New York. Joe Montana’s performance may also bring D.C. football fans comfort. He led the Chiefs to an AFC Title Game after winning four Super Bowls in San Francisco. Shanahan can only hope the 33-year-old Donovan McNabb works out that well for his new team.