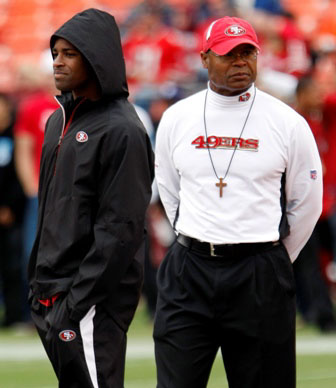 The 49ers receiver (left) has made more news off the field than on since entering NFL (Paul Sakuma/AP).

Michael Crabtree news has dominated 49er training camps in each of his two seasons with the team. Last year the number one draft choice sat out training camp and the first five games of the regular season in a contract dispute. This year, the latest Michael Crabtree news centers on a neck injury that has kept him out of all the preseason games and his lack of attention to detail recently led to a profane and public calling out from offensive captain Vernon Davis.

The exact nature of the 20-minute long heated discussion between Davis and Crabtree is unknown. What is known is that many on the San Francisco roster are tiring of Crabtree’s diva-like behavior but feel powerless to say anything because of the young receiver’s skill and position in the organization.

Crabtree was selected 10th overall by the 49ers in the 2009 draft after his sophomore season at Texas Tech. In his very first game with the team, despite having become the longest rookie holdout in 49er history, Crabtree caught five passes for 56 yards and played more snaps than any other receiver on the team. Crabtree finished his rookie campaign with 48 receptions, 625 yards and two touchdowns in only 11 games. He led all rookie receivers in yards per game, with 56.8 yards per game.

That performance on top of his six year, $32 million contract ($17 million guaranteed) has obviously made him special in the eyes of the 49ers organization, and it appears that Crabtree has taken full advantage by milking his Aug. 12 neck injury for all its value and minimizing his work in training camp. On Sept. 1, Davis decided he had enough.

Head coach Mike Singletary not only seemed to endorse the 20-minute on-field conversation, he let it continue in the locker room afterwards. When he faced the media after practice, he wasn’t exactly dismayed with what took place even if he seemed to wish Davis had handled things a little differently.

“You have kids and every now and then your kids have some misunderstandings or what have you and they forget that there is a father at home,” Singletary said about the latest Michael Crabtree news. “They were both wrong. And we will not have distractions on this team, Vernon just forgot temporarily, and that is not allowed. We don’t do that. We don’t treat family like that. We don’t disrespect each other. And I just needed to remind him that that’s not who we are. He’s fine. He did a great job. He’s one of the captains. He did the right thing, but he did it the wrong way.”

Certainly the 49ers hope that the next bit of Michael Crabtree news relates to his on the field prowess. In college he was the first two-time winner of the Fred Biletnikoff Award as the top receiver in the NCAA. He also won the similar Paul Warfield Award twice in his only two years as an undergraduate player and was a multiple first team All America Selection.

Beyond his perfect record avoiding preseason games for two consecutive seasons, the San Francisco Chronicle reports that Crabtree frequently ignores the media and is one of the very few players unresponsive after games, even wins. At age 23 (on Sept. 17), the 6-1, 217 pound physical genius does not seem to understand that the main conduit between players and fans is the media, and that he will have very little goodwill on which to fall back if his on-field performance slips.

What may save Crabtree is the understanding that his financial future is tied up in his behavior as well as his performance. He has endorsement deals with EA Sports to appear on their game boxes, and with Subway to promote their sandwiches. Those jobs will demand on the Michael Crabtree news being mostly positive as well as helping the 49ers win games.