Loyalty Pays Off For Best Wide Receiver in the NFL 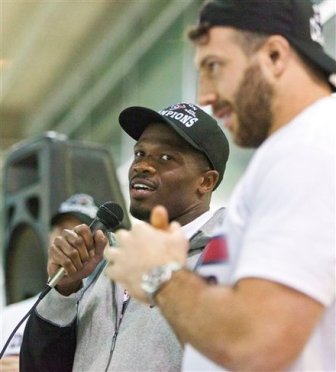 Former major league manager Leo Durocher rode the phrase, “Nice guys finish last,” into three World Series Championships and a spot in the Baseball Hall of Fame. Houston Texans’ wide receiver Andre Johnson took a large step towards proving Durocher wrong last weekend when the most senior member of the Texans was rewarded for his years of loyalty and community service in Houston with the franchise’s first berth in the NFL playoffs.

For his nine years with the Texans, out of the University of Miami, it could be argued that Johnson has been the best wide receiver in the NFL. He has averaged better than 78 catches per season with three seasons of more than 100 receptions. He has twice led the league in receptions and total receiving yards and has led the NFL three times in receiving-yards-per-game. Through that period he has also been a leader in the Houston community.

As the face of Houston’s 10-year-old expansion franchise, he found time to create the Andre Johnson Foundation benefiting children and teens growing up in single parent homes. Johnson says that he “loves reaching out to kids. It’s something that I wanted to do when I joined the NFL.

“I started it (the foundation) in my rookie year,” he continued.  “When I signed my first contract I knew I wanted to give something back to the community.  I came from a single parent home and I just wanted to support parents and kids when I can.  We all (NFL players) have to remember where we came from.  I know I do.”

Ironically, as the Texans climbed into the playoffs, the two-time All Pro and five time member of the AFC Pro Bowl team suffered through a down season and may be at the precipice of the decline phase of his career. The man who had been the best wide receiver in the NFL was able to play in just seven games, catch only 33 passes and score but two touchdowns.

As is common in the latter stages of skilled players’ careers, Johnson’s legs seem to be giving out on him. He missed parts of six games early this season with a right hamstring injury and then three games late in the season with left hamstring problems.

Johnson was able to get back on the field for 20 snaps in Houston’s season ending loss to the Tennessee Titans, and Coach Gary Kubiak wants him on the field for up to 50 plays in the Texans’ first playoff game this Saturday against Cincinnati. Kubiak is wary of making Johnson an every-down receiver, even in a playoff game. “I don’t think he’s ready to play 70 plays,” Kubiak said. “We don’t want him doing that anyway. We want him playing 45 to 50 good ones, and I think he’ll be ready to do that.”

Johnson has competed for notoriety throughout his career with the likes of Terrell Owens and Chad Ochocinco, wide receivers who, while productive on the field, would often lead the league in quotes beginning with the word I. The unassuming and community-focused Johnson, by contrast, played for a struggling team with a low profile, far from the media glow of glamour teams like the Cowboys, Giants and Patriots.

Now, perhaps in the twilight of his career, the man who has been called the best wide receiver in the NFL will get his shot in the playoffs. Time will tell if Houston has what it takes to beat Cincinnati this weekend and then get past New England and Baltimore to represent the AFC in the Super Bowl. If the Texans make it, it’s likely that Johnson and his problematic hamstrings will play a major role.