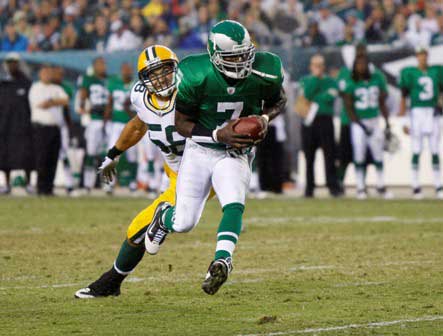 Vick’s early success in 2010 has captivated the NFL (Mel Evans/AP).

The Latest on Michael Vick; He’s Starting Again in the NFL

Michael Vick got to celebrate Easter twice this year as his NFL career completed its rise from the dead when he was named starting quarterback for the Philadelphia Eagles by head coach Andy Reid on Sept. 21. The latest on Michael Vick is nothing short of “unbelievable,” according to Reid.

Vick’s career was put on life support three years ago when he was convicted of running a dog fighting operation from several homes along the Atlantic Seaboard. Vick and his team raised dogs to fight, killed dogs that did not perform well enough, and were often cruel in the training and treatment of the animals.

Since then, Vick admitted wrongdoing, served time in prison and in a halfway house and eventually returned in a backup role last year for the Eagles behind Donovan McNabb. When Donovan McNabb was traded, Reid named Kevin Kolb starting quarterback after Kolb signed a one year, $12.5 million contract, while Vick accepted the second string job and vowed to stay ready.

Vick’s opening came sooner than anyone expected. Kolb suffered a concussion during the Eagles opener on Sept. 12 against the Green Bay Packers and was removed from the game. Vick came in and led a comeback that just fell short. On Sept. 19 the Eagles beat Detroit 35-32. Vick completed 21-of-34 passes for 284 yards with two touchdowns and no interceptions.

The dilemma for Reid was that Kolb had recovered from his concussion and was cleared to play, while Vick had performed extraordinarily well in Kolb’s absence. The Eagles had a major investment in Kolb, who had played well in the preseason, but in Vick had one of the most dynamic players in NFL history showing he had shed the rust from missing two full seasons and coming off the bench in 2009.

On Sept. 21, Reid explained whey he chose Vick to lead his offense. “He is playing exceptional football right now,” said Reid. “I think that is obvious to everybody.” It was not an easy decision, and Reid did not make it alone.

“Listen, I think I had to make this decision. I’ve had the full support of the front office. I counseled with (general manager) Howie Roseman today and bounced some things off of him, but the first person I met with on this decision was Kevin Kolb. That’s the first person I talked to,” said Reid. “And I met with him the last two days, and we shared thoughts. He’s a young quarterback that I think the sky’s the limit for. He’s just in a situation where he’s got an ex-superstar that now has regained his abilities, and it’s really that simple. Michael Vick is playing out of his mind right now, and that’s a beautiful thing. What a lucky franchise and a lucky head coach I am to have two quarterbacks that I feel that way about. I mean, it’s unbelievable.”

The latest on Michael Vick is nothing short of miraculous. It takes a phenomenal athlete to return to the NFL at 29 after wasting away in prison for two years and then play at a superstar level. The Eagles obviously did not believe he could do it judging by the investment they made in Kolb. Had Kolb not been hurt, and if the NFL had not recently become more conscientious about head injuries, the latest on Michael Vick might have been centered just on how well he ran the Wildcat offense as a backup. It is to his credit, however, that once he did get the opportunity he took full advantage of it.

The latest on Michael Vick and his superb play, the saga of Kolb, and the bold decision making of Reid make the Eagles one of the most compelling stories of the 2010 NFL season.