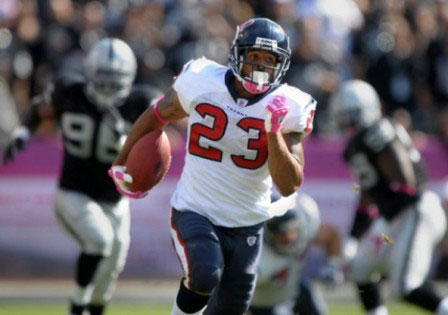 Arian Foster hopes to prove that vegan athletes can compete at the highest level (Photo courtesy of ecorazzi.com).

Arian Foster has gained more than 2,800 yards in the last two seasons for the Houston Texans. He has caught 119 passes and scored 30 touchdowns.

Most athletes would not want to change a thing, but Foster has changed one of the biggest things…his nutrition. He has become a vegan athlete.

“Arian has been one of these guys I call a seeker, looking for optimum nutrition and variety,” Anding said to the Ultimate Texans blog. “In my working with him, he has been open to a lot of strategies to get him where he needs to be, not only as a professional football player but, more importantly, as an adult man who has a child and a wife. That’s the new NFL player. I don’t think Arian is unique.”

Still, based on research done by Regal, Foster seems to be the only vegan in the NFL, which could be problematic based on the estimated 5,000 calories an NFL player burns each day.

Anding expresses no concern about Foster’s ability to meet his caloric needs, sans meat and dairy products. And the health advantages of a plant-based diet are myriad and well-documented.

Simply put, a vegan eats no animal products whatsoever. Whereas a vegetarian will often still eat dairy products, eggs and honey, vegans eschew all such foods. Nor do they use any product derived from animals, such as fur or leather. In this way, vegans uphold ethical and environmental standards towards animals and the land.

As with vegetarianism, a well-planned vegan meal yields all the protein, minerals and vitamins necessary for good health according to research done by Regal.

Some of the important advantages of a vegan diet are that the risk of colon cancer, prostate cancer, high blood pressure and heart disease are significantly lowered. A vegan diet also helps control diabetes, which is becoming epidemic among Americans…especially borderline obese African American former professional football players.

Detroit Tigers All Star first baseman Prince Fielder was briefly a vegetarian while he played for the Milwaukee Brewers. Fielder said he went back to eating meat after about three months because his diet became the central topic in the media whenever he went through a two week stretch of not hitting homeruns at his expected rate.

While it is impossible to know exactly how many vegans there are in the U.S. or who is faithful to the diet and who cheats, U.S. News and World Report said in December that vegans are a growing segment of our population, which includes vegan athletes. Former President Bill Clinton and Martha Stewart are among the Americans who now claim to be vegans.

So maybe Foster is on to something and maybe Anding, the Texans’ nutritionist, is right when she says that there should not be any fall-off in Foster’s performance as a result of becoming a vegan athlete.

Ultimately, though, Texans fans want to win and want to see Foster perform at a high level. It will be interesting to see how a fall-off will be received and if Fielder’s experience in Milwaukee will be repeated in Houston this fall after Texans fans get a good look at their very own vegan athlete.