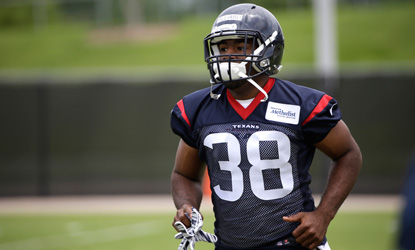 When athletes pull off the miraculous on the field of battle, many coaches and commentators urge them to act like they have been there before.

For Houston Texans rookie running back Kenny Hilliard, it is almost as if he has been here before, because he has benefitted from the wise counsel of his uncle Dalton Hilliard and cousin Ike Hilliard, both former NFL stars, throughout his amateur career.

Hilliard’s plans to connect with the community are already in motion.

According to his agent James Gilmore, Kenny Hilliard lost his father at an early age to a preventable illness.

That loss inspired him to set up a foundation to educate youth on educational and physical health development.

Any fan of the Tigers can attest that the backfield competition for playing time in Baton Rouge, La. is intense and that intensity will continue four hours west in Houston.

Blue has also been able to give Kenny Hilliard great advice about his new team and what to expect in the pros.

“Blue’s been great at giving advice about what I should expect in the transition,” Hilliard said.  “To start fast and have fun, to learn from the veterans, how they practice, how they play, how they interact with the guys on the team.”

The Hilliard-Blue friendship is a given because of the years spent playing together, but both are professionals and will definitely compete to the fullest for playing time behind starting running back Arian Foster.

That spirit of competition is something embedded in the psyche of recent LSU running backs, as the school has become a factory for sending backs to the next level.

The running back by committee approach at LSU might also help add years to the professional careers of their alums.

“I’d say (having multiple running backs at LSU) helped more than anything.  Coming through a program where the expectations to perform are high, it can only serve to prepare you for the next level.  Of course, there is a system in place with multiple backs so that can have an affect on the number of carries you receive.  Overall, I feel that having that level of healthy competition served to help rather than hinder,” Kenny Hilliard said.

Furthermore, college campuses are known for having healthy competition in the classroom.

And like on the gridiron, Kenny Hilliard rose to the occasion as a student as well.

Although he had the opportunity to leave LSU early for the NFL, he tweeted in January 2014 that he was too close to completing his degree in Interdisciplinary Studies to enter the professional ranks.

“As athletes at the collegiate level, we are also students, so it’s important to obtain an education as well,” he said.

Now, the Patterson, La. native is getting an education via a crash course on NFL criticism, something that undoubtedly comes with the territory.

Scouts have criticized what they perceive as a lack of burst and an average 40-time at the combine.

However, he considers the criticism a learning experience and knows he belongs as indicative of his draft selection by the Texans.

His whole amateur career was a learning experience via the advance classes he took under the tutelage of the talented Hilliard clan.

He has been groomed for this moment his whole life and if he is anything like the elder Hilliards, he will be admired just as much for his exploits on the field as he will be for the way he carries himself off of the field.